Get Burke & Hare cheaply from Amazon, or read more articles on film and television. You too can earn money from writing articles by signing up for InfoBarrel.
InfoBarrel is a writing platform for non-fiction, reference-based, informative content. Opinions expressed by InfoBarrel writers are their own.
InfoBarrel > Entertainment > Film > Movies

15 certificate, 91 minutesDirector: John LandisStars: Simon Pegg, Andy Serkis"This is a true story. Except for the parts that are not."Set in Edinburgh in 1828, and loosely based on the actual Burke & Hare murders. William Burke (Simon Pegg, Star Trek Into Darkness, The World's End) and William Hare (Andy Serkis, Dawn of the Planet of the Apes, Star Wars: The Force Awakens, The Hobbit: An Unexpected Journey) are unemployed Irish workers desperately trying to make money. Hare's wife, Lucky (Jessica Hynes), runs a boarding house where one of the tenants, Donald, has just died. Burke & Hare are told to get rid of the body when, whilst having a drink in a local pub on the way to dispose of the inconvenient corpse, a chance conversation between Hare and Danny McTavish (David Hayman), enforcer for local crime lord Fergus (David Schofield), makes them aware of the demand for bodies by the local medical establishment, renowned across the world for their teachings.

Credit: http://en.wikipedia.org/wiki/File:Burke_and_Hare.pngDr Robert Knox (Tom Wilkerson) desperately needs bodies for dissection. Rival, Dr Monro (Tim Curry), has had a law enacted that seriously limits the ability of Knox to acquire bodies. Fergus had been supplying Knox with fresh corpses, robbed from graves, at £3 per body, but Captain Tam McLintoch (Ronnie Corbett) of the Edinburgh Militia, although not the most competent officer around, has made bodysnatching a chancy proposition, so Fergus has pulled out of it, investing his time in other criminal enterprises. McTavish says this is a pity, as Knox is now probably likely to pay even more per body, given the current dearth of fresh corpses that he has access to, but without a supply, there's no means of selling them.Burke & Hare promptly take the fresh corpse to Knox, who is willing to buy it, no questions asked, even though it is slightly the worse for wear, having been folded in half. The pair decide that they need more bodies, as Knox is willing to buy more corpses, still with no questions asked. Burke has fallen in love with local performer Ginny Hawkins (Isla Fisher) and offers to fund her play, so he needs more money to do so in order to finally get the girl.The pair attempt to murder people to gain new "product" or fresh corpses, often with somewhat less than total expertise, and a number of deaths result more by chance than by planning. Meanwhile, Captain McLintoch is also on the trail of the West Port murderers. They do still manage to rack up a sizeable number of kills, all of which they sell to Knox. Hare even names a method of killing "burking" after his friend Burke.Burke and Hare is a blackly humerous take on what were a couple of nasty customers who killed quite a lot of people for money. There is quite a bit of deviation from what actually happened, and the pair are, in general, portrayed as more likeable than they actually were, Hare in particular being a piece of work in real life. Not a bad film, but not a great one, and possibly too nice a slant in parts on the murderous duo. 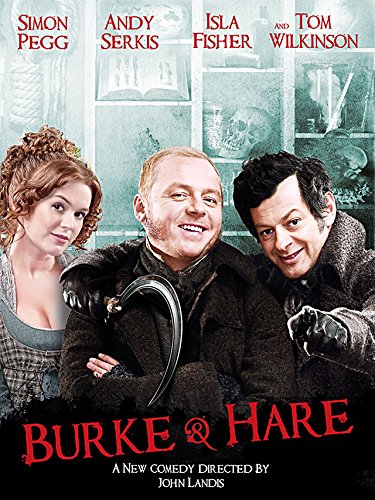