Get Central Intelligence from Amazon. You too can earn money from writing articles by signing up for InfoBarrel.
InfoBarrel is a writing platform for non-fiction, reference-based, informative content. Opinions expressed by InfoBarrel writers are their own.
InfoBarrel > Entertainment > Film > Movies

Certificate 12A, 107 minutesDirector: Rawson Marshall Thurber Stars: Dwayne Johnson, Kevin Hart, Danielle NicoletCentral Intelligence opens 20 years ago at Central High School, in what is presumably somewhere in Maryland. Robbie Weirdicht (Sione Kelepi), who is overweight, has braces and no friends, is singing in the shower of the boys locker room. When a group of bullies grab him. In the school gymnasium, Calvin "The Golden Jet" Joyner (Kevin Hart, Get Hard, Ride Along 2, The Wedding Ringer), basketball, baseball and cross country star, drama star, homecoming king and voted Student Most Likely to Succeed, is receiving the student of the year award at the last pep rally for the senior class when a naked Robbie is thrown out into the gym by the bullies, to laughter from, almost, everyone. The main exception is Calvin, who gives Robbie his letter jacket so that he can cover himself up. Robbie is never seen again at the school after the event in the gym.

Credit: https://en.wikipedia.org/wiki/File:CentralIntelligencePoster.jpg20 years later and the school reunion is approaching. Calvin married his high school sweetheart, Maggie (Danielle Nicolet), but doesn't want to attend the reunion. Their marriage is having the odd problem, and his wife wants to see a marriage counsellor, but this all stems down to Calvin feeling like a failure. Once the student most likely to succeed (a fatal vote to receive), he is now an accountant. A good accountant, to be sure, but his former assistant has just been promoted past him. He doesn't want to go back to the school for everyone to see that his life didn't get any better after high school, and be the person who peaked at age 18.Calvin receives a friend request on Facebook from someone called Bob Stone (Dwayne Johnson). He doesn't recognise the name, although Bob gives the impression that they went to school together, and Bob seems a bit weird, but Calvin accepts the friend request anyway. Bob asks if they can meet up later for a drink, and he agrees to that too. When Calvin arrives at the bar, he doesn't recognise Bob, who reintroduces himself as the former Robbie Weirdicht. Robbie has renamed himself and, although he might not have actually lost weight, he has redistributed it more than a little, being bigger (Calvin is still the same size) and physically buffed up - Calvin says that Bob looks like Hercules (and Hercules is a role that Johnson has played). In person, Bob also seems an odd mixture of sensitive (he's very fond of unicorns and the film Sixteen Candles) and tough guy. The latter becomes evident when Bob quickly deals with four bullies in the pub. Bob, unsurprisingly, is not fond of bullies.After the night out, Calvin says that if there's anything he can ever do for Bob, then the latter should just ask. So Bob does. Bob wants help with checking some payroll regarding some international work he did, which apparently will involve forensic accounting. Which just happens to be Calvin's speciality. And Bob just happens to have the login details with him. Which makes this seem like a setup. Calvin agrees anyway, and the site they go to seems a little odd. It appears to be an auction, with only a few hours left to go on it, with bids in the millions of dollars, many from countries considered dodgy. After "accidentally" destroying Calvin's laptop by spilling a beer on it, Bob asks if he can stay the night, and Calvin agrees.The next day, Calvin answers the door to Agent Pamela Harris (Amy Ryan, Escape Plan) of the CIA and two other CIA agents. They are looking for Bob, who is apparently a rogue CIA agent wanted for treason and murdering his former partner. Bob, in the meantime, has completely vanished. It also seems that the act of generosity in the high school gym caused Bob to consider Calvin to be his best friend. His only friend in fact. Calvin, in order to get himself out of potential trouble, agrees to help Agent Harris. Bob proves more adept at evading capture, and enlists Calvin's help. Even though Calvin really doesn't want to give it, and tries to back out. Bob, however, takes his compliance as moot, and wheels him from one violent action to another. Bob says that he's looking for the Black Badger, who killed his partner and stole U.S. satellite encryption keys to sell to the country's enemies. Agent Harris claims that Bob is delusional, and that he is wanted for stealing the encryption keys. Calvin is uncertain as to who is telling the truth, and who to trust. Is Bob as oddly vulnerable and sensitive as he seems to be? Or is this all an act? Bob, and to a degree the audience, are continually kept guessing.Once again, Kevin Hart is playing Kevin Hart -  a short, fast-talking motormouth whose words don't always make logical  sense. Admittedly, there's not a lot he can do about the short bit, but he may need to do something about the rest before he's completely unable to find any other roles. Which could quickly derail his career once this portrayal becomes tiresome. once again, he has also been teamed up with someone much bigger than him. Dwayne Johnson is a foot taller, 6'4" to Hart's 5'4", and not only that he's just generally bigger all round. Perhaps double his body mass. Presumably this is deliberate, in order to emphasise the difference between the two. Or emphasise just how short Hart actually is.This is a comedy action film, where both partners are the comedy partner, rather than just one of them. There are normal bits which then turn into sudden action scenes, and lots of parts of the plot don't actually make a lot of sense if they're thought about too deeply. There is a message of acceptance in the film, of becoming who you can be and being happy for the genuine things you have, not what you think you should have. The young Calvin doesn't really seem that convincing as the all-round superstar he supposedly is in high school. Perhaps he's too short to do that (he's certainly pretty short for a basketball star), or maybe his portrayed personality doesn't really jibe with what he's supposed to be.There are outtakes at the end of the film which should be watched - especially as they're probably the funniest part of the film. This is a watchable film, but nothing exceptional. Lots of elements of it have been done before - quite a few of these in previous Kevin Hart films too. Central Intelligence is an adequate enough comedy that can keep you reasonably entertained, but it doesn't bring anything new to the table, nor does it seem as funny as it could have been (going by the outtakes). 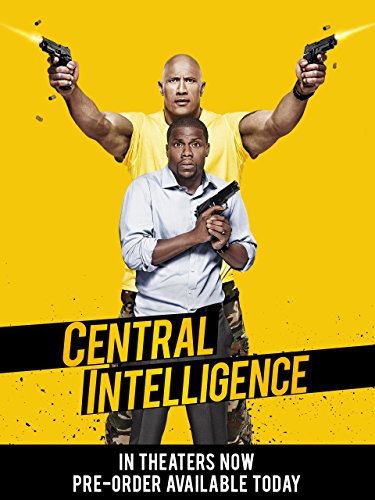