Buy Chappie cheaply from Amazon. You too can earn money from writing articles by signing up for InfoBarrel.
InfoBarrel is a writing platform for non-fiction, reference-based, informative content. Opinions expressed by InfoBarrel writers are their own.
InfoBarrel > Entertainment > Film > Movies

Certificate 15, 120 minutesDirector: Neill BlomkampStars: Sharlto Copley, Dev Patel, Hugh Jackman Chappie, at the very beginning, has two, brief, interviews, both of which are discussing Chappie, before going back 18 months. The film is set in Johannesburg in South Africa. The streets of the city are becoming increasingly dangerous and the police have started employing robots called Scouts, manufactured by a company called Tetravaal, which have limited artificial intelligence.

Credit: https://en.wikipedia.org/wiki/Chappie_%28film%29#mediaviewer/File:Chappie_poster.jpgThe Scouts have largely been created by programmer Deon Wilson (Dev Patel), who has also been researching true artificial intelligence for the best part of three years. A colleague, former soldier and weapons designer, Vincent Moore (Hugh Jackman) is opposed to the idea of artificial intelligence, and is therefore not a big fan of either Deon or the Scout programme, and has designed his own robot, Moose, which, rather than the semi-AI of the Scouts, requires a human controller. Moose has had its funding cut repeatedly, due to the success of the Scouts, which makes him even less happy.Moose is also proving unsuccessful commercially - probably because it, like the Scouts, is also being sold as a police robot - something for which it is really, really unsuited for, as much as a main battle tank would be for most police forces. This thing can shoot down aircraft, which is not the sort of thing that police have that much call for, and probably should have been marketed to the military as a combat mech more than anything else.Deon's attempts at creating true AI finally seem to be successful, but he needs a robot chassis to try it out with. One of the Scouts being operated by the police, 22, is really unlucky and is constantly being damaged. Finally receiving an RPG to the chest, it is scrapped. The company's boss, Michelle Bradley (Sigourney Weaver, Red Lights, The Cold Light of Day), refuses to give Deon the go-ahead, so he steals the scrapped robot, intending to do it himself.Little does he know that a small group of criminals, consisting of Ninja (Ninja), Yolandi (Yo-Landi Visser) and Amerika (Jose Pablo Cantillo) have decided to kidnap him. Desperate for money, they want the Scouts' designer to give them an edge over the robots, so that they can pull of a heist. On finding 22 in Deon's van, the robot is reprogrammed with Deon's new AI. Deon tells them that the robot, which Yolandi dubs "Chappie" (Sharlto Copley, Elysium, Hardcore Henry, Maleficent), is a child and will need to learn.Chappie starts to learn things the hard way. Yolandi tells Chappie that she is his Mommy, Amerika is rather ambivalent and Ninja isn't happy that this robot will not do what he wants it to do - namely commit crimes. Deon is trying to teach Chappie right and wrong whilst Ninja is getting him all gangsta and blinged up, as well as telling him a few lies to get him to co-operate. Meanwhile, Vincent has his own plan running in the background, which does not have the best interests of anyone else in it, and he really, really hates the whole idea of Chappie.Chappie sees actor Sharlto Copley and director Neill Blomkamp team up yet again - they previously worked on District 9 and Elysium - and yet again they have done another good, science fiction film. Two of the three criminal members of the cast are more or less unknown - the exception is Jose Pablo Cantillo, who also appeared in Elysium. Much of the film is based on Chappie's interactions with the three, with Yolandi treating him like her own child, whilst the other two are more variable. Watching Chappie become all gangsta and be taught how to work correctly with swagger by Ninja is an entertainment in itself. He also evolves and becomes more complex and more human as the film progresses. The film is at times touching and at times humorous, something you wouldn't expect from something that sees so much violence, but even that has its funny moments, such as when Chappie says "I forgive you, bad man" after basically pounding the living daylights out of someone. Chappie is also able to convoy emotions, something else that you wouldn't expect from a robot. This is down to his posture, his antenna - without these behaving like expressive ears, a lot would have been lost - and a couple of things of no discernible purpose on his face manage to convoy a whole range of emotions.Chappie learns friendship and love for others and, despite what his criminal friends might want, really isn't fond of the idea of violence or crime, but he get gets duped into committing it. Despite the violence and bad language throughout - Deon isn't happy when he discovers that Chappie has been taught to swear, resulting in him confronting people far more dangerous than he is - this is really quite a touching film. Chappie is a much deeper film than might be thought, being far more than a simple action fest. 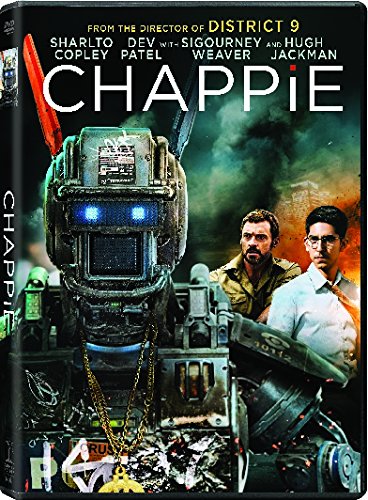