Biy Chef cheaply from Amazon. You too can earn money from writing articles by signing up for InfoBarrel.
InfoBarrel is a writing platform for non-fiction, reference-based, informative content. Opinions expressed by InfoBarrel writers are their own.
InfoBarrel > Entertainment > Film > Movies

Certificate 15, 114 minutesDirector: Jon FavreauStars: Jon Favreau, Robert Downey Jr., Scarlett JohanssonChef stars Jon Favreau as Carl Casper, the chef de cuisine at a restaurant in Los Angeles. The hefty and tattooed Carl is passionate about food, and clearly enjoys both cooking and eating it. The restaurant is expecting a visit from a big food critic and blogger, Ramsey Michel (Oliver Platt). Carl wants to serve something different than their usual fare, but the owner of the restaurant, Riva (Dustin Hoffman), intervenes and convinces him to cook his normal menu, as that's what people come to the restaurant for.When, as a result of this, Ramsey gives a bad review, Carl joins Twitter - he has little knowledge of social media and how it works - and posts what he thinks is a private message to Ramsey, but is actually public, which results in quite a bit of fuss being made online. He challenges Ramsey to come in again and try something different, planning to cook the menu he originally planned on, but Riva this time tells Carl that he can either cook the standard menu or leave. Carl does quit, but not before having a go at Ramsey, which results in videos of the argument that go viral on the internet - Carl is still not understanding how this social media thing works.

Credit: https://en.wikipedia.org/wiki/Chef_%28film%29#mediaviewer/File:Chef_2014.jpgAs well as his problems at work, Carl is divorced from his wife, Inez (Sofía Vergara), and has a fairly poor relationship with his young son, Percy (Emjay Anthony, Krampus), mostly due to not spending enough time with him. Convinced by Inez to go with her and Percy to Miami, where they both started out, he is offered a food truck (catering trailer) by the slightly odd Marvin (Robert Downey, Jr., Avengers: Age of Ultron, Captain America: Civil War, Iron Man 3, The Avengers), Inez's prior ex-husband, mostly at Inez's urging, Inez seeing to get on quite well with both her exes. The food truck is in a bit of a state, but Carl does it up, repaints it, and starts selling cubanos, a type of sandwich, with the help of Percy and Martin (John Leguizamo), a cook from his former restaurant who flies out to join him. The three of them then drive the food truck cross country back to Los Angeles.This isn't a road trip film, as it is quite some way into the film before Carl gets the truck, even though the idea is mentioned very early on, as Inez believes it will be a good thing for him to get. Some of Chef does involve driving the food truck back, and on the relationship between Carl and Percy along the way, with them stopping in a number of different cities. Instead, what this film is about is the food - cooking it, eating it, and Carl rediscovering his passion for it, something he had been losing at his old job. This probably isn't a good film to watch of you are dieting. Or a vegetarian. The other main thread is Carl's relationship with his family.Jon Favreau not only starred in this, but he also wrote, directed and produced it, making him quite a busy person. There is a rather extensive use and mention of Twitter - and their mobile app Vine. Even with Twitter being quite a big social networking medium, you do get the feeling that the company bought a lot of product placement in Chef. It does blend in reasonably well with the plot, but the sheer amount of mentions are rather noticeable. 15 is an oddly high certification for this film; there is some bad language, but there is no violence at all, which makes the certification a bit puzzling. Other than a couple of minor niggles, Chef is an enjoyable feel-good comedy film, and the shots of the food are enough to make you pretty hungry by the time it finishes. 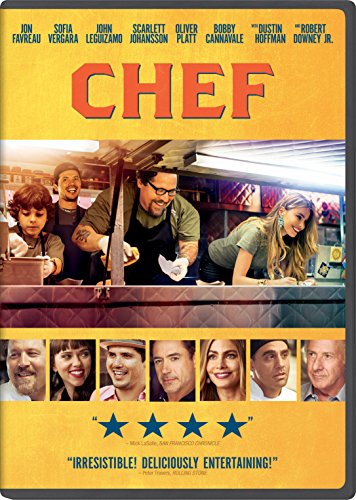