Get Conan the Barbarian or the two Conan films starring Arnold Schwarzenegger cheaply from Amazon. You too can earn money from writing articles by signing up for InfoBarrel.
InfoBarrel is a writing platform for non-fiction, reference-based, informative content. Opinions expressed by InfoBarrel writers are their own.
InfoBarrel > Entertainment > Film > Movies

Certificate 15, 113 minutesDirector: Marcus NispelStars: Jason Momoa, Ron Perlman and Rose McGowan Conan the Barbarian is the creation of the late Robert E. Howard, although the character has since been written about by many other authors.This isn't the first time the Conan stories have been made into a film. The 1982 movie Conan the Barbarian was the film that really propelled Arnold Schwarzenegger (The Expendables 2) to success, in which he starred as the eponymous Conan, a role he reprised in the less successful 1984 sequel Conan the Destroyer. The new film was shot in both 2D and 3D, although the 2D version was the one watched.

Credit: http://en.wikipedia.org/wiki/File:Conan_the_Barbarian_%282011_film%29.jpgThe film is set in Hyboria, in the supposed history of the world after the sinking of Atlantis but before the rise of known civilizations. The Necromancers of Acheron made a Mask and conquered most of the world, with the exception of the barbarian tribes of Cimmeria, who defeated Acheron and dismantled the Mask, keeping the pieces amongst the various tribes.Many years after the defeat of Acheron. the village of the young Conan (Leo Howard) is attacked by the forces of Khalar Zym (Stephen Lang) and his sorceress daughter Marique (Rose McGowan) and all the inhabitants killed, including Conan's father, Corin (Ron Perlman, Drive, Season of the Witch). Zym wishes to remake the Mask of Acheron, destroyed years previously, and is attacking the barbarians for the pieces that they hold.Years later as an adult Conan (Jason Momoa) is still searching for Zym when he saves Tamara (Rachel Nichols) from Zym's forces. Zym needs Tamara to finish remaking the Mask of Acheron. Zym is no longer a bandit and raider, but has become a powerful warlord. He decides to keep Tamara around to help him trap and kill Khalar Zym.The film is extremely violent and bloody, although the latter does not appear very realistic, more of a comic book nature as was seen in 300. The character of Conan is fairly typical for this type of film; a bit two dimensional.Conan the Barbarian is a sword & sorcery film; a sub-genre of fantasy that was once very popular and many older fantasy films were of the same type, but this type of fantasy has, in both literature and the cinema, fallen out of favour in more recent times. In a large part this is because the character types in these stories are no longer original, and have both appeared and been parodied so many times now that the people in them are no longer characters but caricatures. The villain is evil, powerful and obviously hasn't read the Evil Overlord list; the magic users are bad and the barbarians have really big swords and don't wear anywhere near enough armour.This isn't a bad film for its' type, although nowadays it's hardly original - it basically does exactly what it says on the tin - so if you fancy watching a film of the "Hero with big sword defeats evil [INSERT BAD GUY TYPE HERE]" genre, this one is okay. Although the 1982 film of the same name starring Arnie is better. 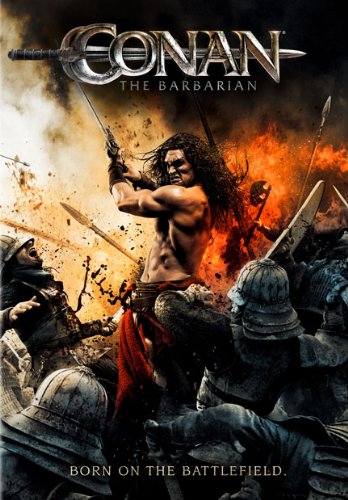