Get Contraband cheaply from Amazon, or read more articles on film and television. You too can earn money from writing articles by signing up for InfoBarrel.
InfoBarrel is a writing platform for non-fiction, reference-based, informative content. Opinions expressed by InfoBarrel writers are their own.
InfoBarrel > Entertainment > Film > Movies

15 certificate, 109 minutesDirector: Baltasar KormákurStars: Mark Wahlberg, Giovanni Ribisi and Kate BeckinsaleChris Farraday (Mark Wahlberg, 2 Guns, Ted, Transformers: Age of Extinction) is a former smuggler living in New Orleans. Although very good at smuggling, as well as enjoying it a lot, a short stint inside, plus having a wife, Kate (Kate Beckinsale, Absolutely Anything, Underworld: Awakening, Total Recall), and two young sons, convinced him to leave the life behind, rather than spend his time in prison like his father, Bud (William Lucking). Now, he runs his own alarm company.Kate's younger brother, Andy (Caleb Landry Jones), considered by Chris to be an idiot, along with his friend Walter (Jason Mitchell), were running drugs for Tim Briggs (Giovanni Ribisi) when the ship they are on is stopped and searched by U.S. Customs and Border Protection on the way to New Orleans, forcing them to dump the drugs overboard. When they meet Briggs and tell him this, he, not being the most well balanced individual around, drives into their car with his truck, hospitalising them both.

Credit: http://en.wikipedia.org/wiki/File:Contraband2012Poster.jpgIn order to protect Andy who Briggs has said he will kill, and his own family who Briggs has also threatened, Chris decides to do another smuggling run in order to pay off the debt Andy incurred by dumping the drugs, although his wife is not keen on the idea. Taking Andy with him and some cash, they sign up for work on Chris' fathers' old ship which is sailing to Panama. Several members of the crew are known to Chris and provide help for some of the work needed to smuggle the goods.Chris' long-time friend and former smuggling colleague Sebastian Abney (Ben Foster) suggests getting another shipment of drugs, it being one of the few items worth enough to raise the needed money fast enough, but he refuses to smuggle drugs, apparently on moral grounds. Instead, he decides to smuggle a batch of millions of dollars of counterfeit money.Thinks do not go to plan in Panama. Problems with the initial batch of money ordered results in them having to go to another source, Gonzalo (Diego Luna) who has recently taken over another operation, by apparently feeding the previous boss to the wolves. There, they get dragged into an armed robbery on a security van, which also doesn't go exactly as planned. Whilst out of town, Briggs continues threatening Kate and Chris' children, despite being warned off by Farraday in the beginning when Chris says he will raise the money to pay off Andy's debt.Contraband is a perfectly decent action/thriller, even if it isn't an exceptional one. There is a twist in the story, although this is a pretty straightforward one. Chris Farraday doesn't seem to be very intimidated or afraid of Briggs, as he sticks a gun in his face on one occasion (when actually agreeing to pay him) and beats him up on another, so it is a bit curious as to why he would agree to pay the debt off, although possibly the only other option would be to kill Briggs. 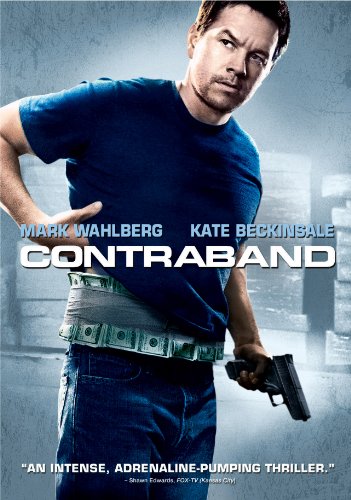