Buy Cuban Fury cheaply from Amazon. You too can earn money from writing articles by signing up for InfoBarrel.
InfoBarrel is a writing platform for non-fiction, reference-based, informative content. Opinions expressed by InfoBarrel writers are their own.
InfoBarrel > Entertainment > Film > Movies

Certificate 15, 98 minutesDirector: James GriffithsStars: Nick Frost, Chris O'Dowd, Rashida JonesAt the start of Cuban Fury the young Bruce Garrett (Ben Radcliffe) is a successful salsa dancer who also loved doing it, winning competition after competition with his sister Sam (Isabella Steinbarth). Their goal is to win the Nationals, but Bruce is accosted in the street by some bullies, putting him off it completely, and he never danced again.25 years later and the older Bruce (Nick Frost, The Huntsman: Winter's War, The World's End, Unfinished Business) is now a very out of shape, albeit competent, engineer, with no relationships in his life apart from that with his sister Sam (Olivia Coleman) and a handful of friends. He is mostly avoiding change or the possibility of leaving his comfort zone, when he is attracted to his new boss, the American Julia (Rashida Jones). It turns out that Julia also likes salsa, spurring Bruce to take up dancing again, especially when she doesn't believe he is actually a salsa dancer after he tells her he is. He certainly doesn't cut the figure of what you would expect one to be.

Credit: http://www.bigtalkproductions.com/wp-content/uploads/2009/11/cuban-fury-poster.jpgJulia is also being pursued, rather more openly, by Bruce's office colleague, the shallow, crude, arrogant and annoying Drew (Chris O'Dowd). Drew, despite the fact that he is someone Bruce spends a lot of time talking to, does not really seem to be a friend. Determined to take up salsa again Bruce searches out his old teacher, Ron Parfait (Ian McShane, Hercules, Jack the Giant Slayer, Snow White and the Huntsman), who is now running a bar (oddly, they both still seem to be living in the same town). He only wants to take one lesson, believing he will get his old skills back quickly. Unfortunately, he needs more help than he thinks and it takes longer to get back to where he used to be than he originally thought as Bruce is really, really out of practice as well as being out of shape.Assuming that Frost is actually doing the dancing - and he does appear to be, with the possible exception of some of the more acrobatic jumping around - he is, as some larger men often are, surprisingly graceful at it. One thing that was noticeable was that Bruce's sister Sam was oddly still quite competent at salsa, much more than he was to start with - perhaps she had been keeping up with her salsa  skills? The dance-off/fight between the annoying Drew and Bruce in the car park is really quite funny. Also watch out for the (very) brief cameo by Simon Pegg (Burke and Hare, Star Trek Into Darkness), Frost's frequent collaborator and colleague in other films and projects.The film has some bad language and some, often rather oblique sexual references - the latter normally from Drew, as they fit his character - but it isn't really that bad or offensive, so the certification is rather surprisingly high. There is nothing in the film that turns out in a way that you wouldn't expect. Cuban Fury is a decent rom-com with a dancing theme that has a good chance of appealing to fans of dancing in general. 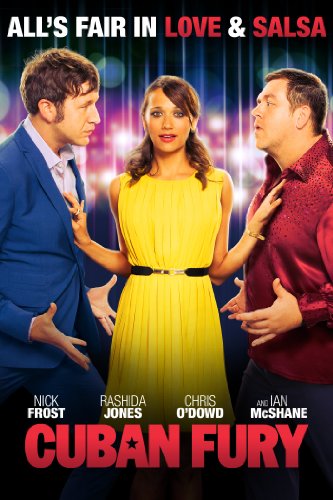