Get Diary of the Dead or more of George A. Romero's zombie films cheaply from Amazon. You too can earn money from writing articles by signing up for InfoBarrel.
InfoBarrel is a writing platform for non-fiction, reference-based, informative content. Opinions expressed by InfoBarrel writers are their own.
InfoBarrel > Entertainment > Film > Movies

Movie Review: Diary of the Dead

Certificate 15, 95 minutesDirector: George A. RomeroStars: Michelle Morgan, Joshua Close, Shawn RobertsDiary of the Dead is a zombie film by the practical inventor of the modern zombie genre, George A. Romero. Unlike his previous four main zombie films - Night of the Living Dead, Dawn of the Dead (the original version), Day of the Dead and Land of the Dead - this does not continue in the sequence where the world is falling apart from zombie attacks. Instead, it goes back again to the beginning of the outbreak, with the initial footage being that of a news cameraman and a reporter filming a story about a family who recently died in a murder suicide. The dead people get back up and start attacking.

Credit: http://en.wikipedia.org/wiki/Diary_of_the_Dead#mediaviewer/File:DiaryofDeadPoster2.jpgJason Creed (Joshua Close) is a student filmmaker who, along with his professor, the rather drunken Andrew Maxwell (Scott Wentworth) and some other students, are out in the woods shooting a mummy film, when they hear about some strange events on the radio. Not knowing what to make of it, and not believing what is apparently happening, the group split up. Jason goes back to the university dormitory to find his girlfriend, Debra (Michelle Morgan), who then wants to go and find her family, as she has been unable to contact them. There is much violence as the students and their professor gradually realise that the dead are coming back to life, and they are forced to defend themselves, sometimes against people they know.Jason himself is rarely seen, as he is the one usually filming what happens, as he is desperate to document the entire story, rather than trying to do anything about what is happening. There is some sort of, intentional, social commentary, about how people behind the lens of a camera become detached from the actual events. In one scene, Jason can't go with his friends to help them because his camera needs recharging and he has to stay with it; in another, a zombie is coming up behind someone he is with, and Jason, rather than actually trying to stop it to save his friend's life, instead is compelled to film it whilst simply shouting warnings. Admittedly, a film which is being shot in this style where all the cast wanders out of camera range would not work so well, but the point is the lack of empathy with the events seen through the camera.This is a very low budget film, shot as if done by a student, and then assembled from the various clips, including news footage, bits from some CCTV cameras and another camera that is discovered along the way, and is done as a sort of documentary after the events. The film is very violent and gory, even if in a manner which has become rather commonplace in the years since Romero shot Night of the Living Dead. The amount of gore and violence does rather overshadow the messages and commentary that the film is trying to make, regarding modern society's dependence on the media, and how people film horrible events rather than doing anything to stop them - something that is probably even more widespread than it is portrayed to be, given the increase in camera phones and social media. Still, Diary of the Dead is a respectable entry in Romero's zombie tradition, even if the genre he created is now becoming a bit tired and worn. 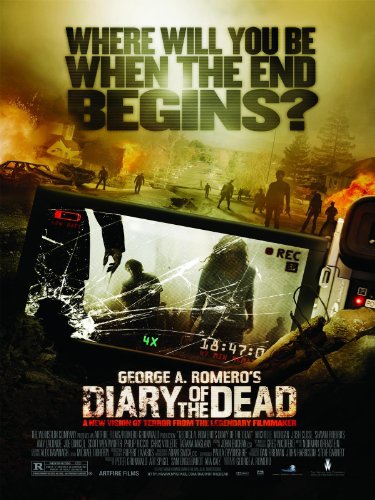