Buy Dredd 3D or Judge Dredd merchandise from Amazon. You too can earn money from writing articles by signing up for InfoBarrel.
InfoBarrel is a writing platform for non-fiction, reference-based, informative content. Opinions expressed by InfoBarrel writers are their own.
InfoBarrel > Entertainment > Film > Movies

Certificate 18, 95 minutesDirector: Pete TravisStars: Karl Urban, Olivia Thirlby and Lena Headey"I am the law!"Dredd 3D is based on the Judge Dredd comic strip, the longest running in the British science fiction comic 2000AD. This isn't the first time the comic has been made into a film; there was also the 1995 film, Judge Dredd, starring Sylvester Stallone (The Expendables 2). The world of Judge Dredd is a futuristic dystopia, where the population of Earth has accumulated in huge mega-cities, with the world outside being a radioactive wasteland known as the Cursed Earth. Dredd resides in Mega-City One which covers a substantial part of the eastern seaboard of the former United States. Justice is enforced by the Judges, who serve as judge, jury and, where required, executioner. Many of the 800 million population of the mega-city live in City Blocks; gigantic skyscrapers housing tens of thousands of people.Dredd 3D stars Karl Urban (Star Trek Into Darkness) as Judge Dredd. He has been assigned a rookie Judge, Anderson (Olivia Thirlby, The Wedding Ringer) a mutant telepath who also appears in the comics. Peach Trees is one of the City Blocks and Judges Dredd and Anderson are called out to investigate three homicides that have taken place there. The Block is the home of Madison Madrigal, aka Ma-Ma (Lena Headey, The Purge), whose gang controls all 200 floors of the Block and manufactures the drug Slo-Mo there. The Judges appearance brings them into conflict with Ma-Ma, resulting in the Block being sealed off from the rest of the city and the Judges having to fight their way through Ma-Ma's gang to the top.

Credit: http://en.wikipedia.org/wiki/File:Dredd2012Poster.jpgSome bits of the film were shown in slow motion, which is because of the drug Slo-Mo which slows down the users perception of the passage of time when taken.The Judge's outfit is similar to the one worn in the comic, but it isn't identical. It's a lot darker, with blacks replacing the blues, and much of the gold adornment being less protruding and diminished. The helmet, apart from the colour, is the most similar. This is actually quite important; in the comics Dredd was known for rarely removing his helmet, and never showing his face, so that all you see of him is his scowl. In the 1995 film, probably because it starred Stallone at his peak, Dredd did take of his helmet revealing his face - a move that wasn't that popular. In this version, all we see of Dredd is a brief glimpse of the back of his head in a darkened room at the beginning of the film as he puts his helmet on. For the rest, all that is seen is his scowl.As for the plot of the film, there is very little to speak of. In many respects, Dredd actually resembles certain types of first person shooter video games (although it isn't viewed from a first person perspective) with the Judges going through corridors and climbing the block shooting enemies on the way.The 3D is pretty much wasted. With the majority of the film taking place inside a building, either in corridors or rooms with very limited lines of sight, it is rare for there to be enough distance in a scene to make the 3D noticeable. Urban's portrayal of Dredd is better than Stallone's, although this is partly because, like the original Dredd, you never see his face. Dredd 3D is a fun, if extremely violent, film with some of the violence slowed down due to Slo-Mo so you can fully "appreciate" it, and is in some ways better than the 1995 film, but not exactly a masterpiece. 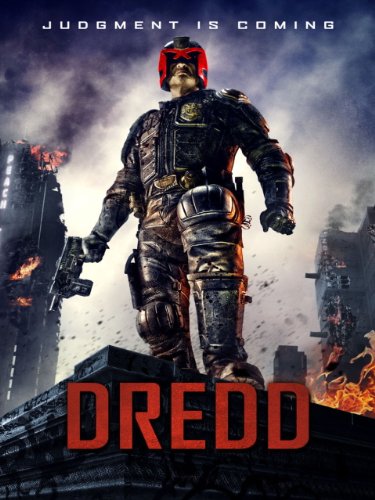