Get Elysium cheaply from Amazon, or read more articles on film and television. You too can earn money from writing articles by signing up for InfoBarrel.
InfoBarrel is a writing platform for non-fiction, reference-based, informative content. Opinions expressed by InfoBarrel writers are their own.
InfoBarrel > Entertainment > Film > Movies

Certificate 15, 109 minutesDirector: Neill BlomkampStars: Matt Damon, Jodie Foster, Sharlto CopleyElysium is a dystopian film set in the year 2154. By the end of the 21st century, Earth was becoming over-populated, polluted and disease ridden. The wealthy moved off planet to a gigantic, wheel shaped space station named Elysium. Everyone else stayed behind on Earth amongst the poverty, as the world degenerated into slums. Those left behind still manufacture things for the wealthy though, who appear to maintain control via armed robots, or droids. On Elysium, the privileged have access to advanced healing technology that can fix almost everything.Max (Matt Damon, Contagion, The Monuments Men) is a paroled criminal who lives in the wasteland which Los Angeles has become and works for Armadyne, a company owned and run by John Carlyle (William Fichtner) and which manufactures the robot police and troops used by Elysium, as well as originally building the space habitat itself. After an accident at work means that he will die in five days without access to Elysium's medical technology. He agrees to do a job for local criminal boss, Spider (Wagner Moura), who he did work for before his prison sentence. This involves Max being, literally, screwed into an exosuit that boosts his strength to that of a droids.On Elysium itself Defence Secretary Delacourt (Jodie Foster) is making plans of her own. Max

Credit: http://en.wikipedia.org/wiki/File:Elysium_Poster.jpgbecomes entangled in them, with the result that Delacourt sets Agent Kruger (Sharlto Copley, Chappie, Hardcore Henry, Maleficent), a brutal enforcer, and his team on his trail. Max also meets a woman he knew as a girl when they were growing up, Frey (Alice Braga), whose daughter is also dying. Max is a pretty unlikely hero. He acts in a very self-centred manner for much of the film, only truly attempting to travel to Elysium when it is his own life at risk, rather than anyone else's.Some technical pickiness. Elysium has been situated in quite a curious orbit. There is no need for a habitat of that size to be located so close to the Earth, and indeed many reasons why it shouldn't. Even in a geo-synchronous orbit, which it doesn't appear to be in, a lot of energy would be needlessly expended on maintaining its' orbit. This would be avoided by situating it at one of the Lagrangian points and, once a space ship reaches orbit, much of the energy needed has already been expended, so it does not require that much more to travel from Earth orbit to a Lagrangian point. There are also defence problems with Elysium's location, as it is close enough to Earth that it can be easily reached from there and, indeed, it seem to lack much in the way of defensive technology at all. The design of Elysium is also of a type that is intended to use rotation to provide artificial gravity, and it not appear to be rotating, although this is not definite. Much of the cyber technology is curiously primitive and invasive, considering the advanced healing methods available, which are, admittedly, not available on Earth. A society that could heal the human body so easily would probably be able to integrate technology better into it.That aside, this is quite a fun film to watch, with plenty of action. There is some gore, although it is not exactly a gore-fest. The overall appearance is great, with the space ships, Elysium and droids all looking pretty realistic. There is a substantial contrast between the idyllic environs of Elysium and the barren wasteland that is 22nd century Los Angeles. In general, Elysium is not a bright and cheery film, but there is an upbeat message in it as Max becomes better than he was. 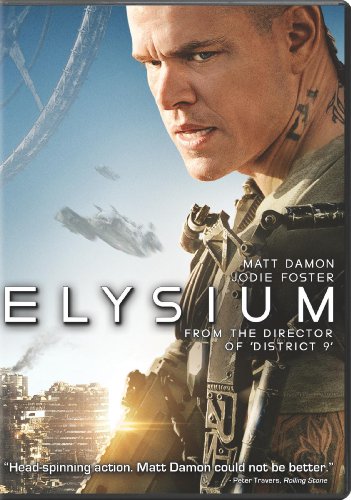