Buy End of Watch from Amazon or read more articles on film and television. You too can earn money from writing articles by signing up for InfoBarrel.
InfoBarrel is a writing platform for non-fiction, reference-based, informative content. Opinions expressed by InfoBarrel writers are their own.
InfoBarrel > Entertainment > Film > Movies

Certificate 15, 109 minutesDirector: David AyerStars: Jake Gyllenhaal, Michael Peña and Anna KendrickEnd of Watch stars Jake Gyllenhaal (Nightcrawler, Prisoners) as Brian Taylor and Michael Peña (Ant-Man, Fury, The Martian) as Mike Zavala, two LAPD cops who operate out of a patrol car in South Central Los Angeles. Much of the film is set in their patrol car, with bits at their station, outside the car during call outs and at various family occasions. During one of the call outs they fall afoul of one of the Mexican drug cartels who put a price on their heads.

Credit: http://en.wikipedia.org/wiki/File:End_of_Watch_Poster.jpgTaylor is filming his job as part of an elective course he is taking as part of some further education he is doing. A lot of the film is shot through various different portable cameras, some from Taylor such as with the two cameras Taylor and Zavala wear clipped to their uniforms, a handheld camcorder Taylor is usually carrying around, the camera inside their patrol car as well as various camcorders being held by others, including the criminals (filing yourself breaking the law really doesn't seem to be a smart move). The parts of End of Watch that probably aren't being filmed by the participants are mostly shot in such a way that they still appear to be the work of amateurs. Oddly, there isn't any mobile phone footage, which would have seemed more likely to have been used than the camcorders which actually were. As a result, the film resembles one of those police reality television shows where the camera crew rides along.Most of the film is based around the friendship of Taylor and Zavala, as well as the relationships between them, Taylor's girlfriend Janet (Anna Kendrick, ParaNorman) and Zavala's wife Gabby (Natalie Martinez) and primarily Zavala's huge family, as well as that with a few of their fellow officers. Interspersed are some clips of gang members. Most of the screen time is taken up by Gyllenhaal and Peña.The trailer is a bit misleading, as it suggests that there is more action in the film than there actually is - this is definitely not an action film, as it is quite slow paced throughout most of it. Even the bust which results in the cartel gunning for them is a long way into the film. A lot of the action that there is in the film is shown in the trailer itself.Although Taylor states that officers on their patch would see more action than officers would in most other areas, there still isn't a huge amount of violence in the film. End of Watch is really just two friends in a car talking to each other whilst doing their job, which just happens to be serving as police officers. If you go to watch it expecting an action film, you're going to be disappointed, but End of Watch is a pretty decent film if it considered as what is probably a more realistic portrayal of police work than an action would have been, and a glimpse into the relationships of the officers in it. 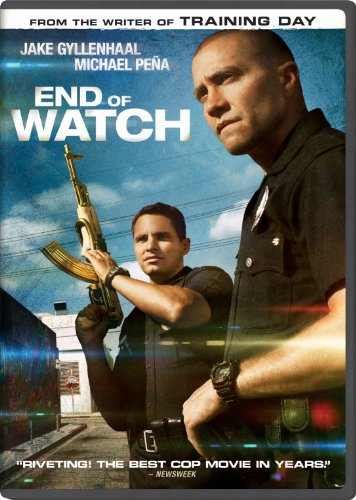