Buy the film Ender's Game, or the novel it is based on, cheaply from Amazon. You too can earn money from writing articles by signing up for InfoBarrel.
InfoBarrel is a writing platform for non-fiction, reference-based, informative content. Opinions expressed by InfoBarrel writers are their own.
InfoBarrel > Entertainment > Film > Movies

Certificate 12A, 114 minutesDirector: Gavin HoodStars: Harrison Ford, Asa Butterfield, Hailee Steinfeld50 years before the start of Ender's Game an insectile alien race called the Formics attacked Earth and left tens of millions dead. The aliens were driven off, and the survivors vowed it would never happen again. The International Fleet was formed to take the battle to the enemy before they can return. The fleet is recruiting children as their commanders, as they will be able to deal with the threat better, and sending them to the fleet Battle School, under the command of Colonel Graff (Harrison Ford, Star Wars: The Force Awakens, The Expendables 3). The film is based on the novel of the same name by Orson Scott Card.

Credit: https://en.wikipedia.org/wiki/File:Ender%27s_Game_poster.jpgAndrew "Ender" Wiggin (Asa Butterfield, Hugo) is a Third, a third child born to a couple. Normally, only two are allowed but, because of the promise his two siblings showed but failed to deliver on, Ender's parents were allowed to have a third, in the hopes that that promise would be fulfilled in him. His older sister Valentine (Abigail Breslin, The Call, Zombieland) had failed because she showed too much empathy, whilst their older brother Peter (Jimmy 'Jax' Pinchak) had failed because he is a sociopath with far too little.Ender succeeds and is taken to Battle School by Graff. Times are considered to be desperate, and so desperate measures are taken to protect humanity, things that would normally not be done. Ender is deliberately isolated from the others to a greater or lesser degree, although he does build up a cadre of friends, particularly Bean (Aramis Knight) and Petra (Hailee Steinfeld, 3 Days to Kill).After Battle School comes Command School, where Ender and his inner circle of commanders are trained and tested in order for them to be suitable to command the fleet, with Ender in overall command. And why is called Ender's Game? Because Ender thinks that he is playing one in Command School.

Differences from the Novel

The novel is actually almost 30 years old. Card resisted having it turned into a film for many years, as he wanted a degree of control over the film.

There are, as can only be expected, differences between the book and the movie, but overall the film stays pretty close to the story in the book.

The differences are mostly of compression. The length of time spent on the Mind Game and the number of battles at both Battle School and at Command School have all been reduced, as has the amount of time spent at each, otherwise the film would have been a lot longer without probably adding much to it. Successively more difficult battles and how Ender manages to deal with them work a lot better in the book than they would probably have done in the film, as in the latter they would have started appearing fairly repetitive.The biggest difference is the subplot between Ender's sibblings Peter and Valentine on Earth, which doesn't crop up at all. This subplot would have been difficult to handle and possibly quite boring to watch as, in Card's words, "because that's just watching people type things into the computer."[1]The children in the film are, and appear to be portrayed as being, older than those in the book; Ender being only ten when he enters Command School in the novel. The aliens in the first book, and often tin the subsequent books when they were referenced, were called by the, deliberately derogatory, name "Buggers," rather than Formics. Also, humanity's level of technology at the time of the first attack seems to be pretty close to present levels, whilst in the novel people had started colonising the Solar System and the battles were actually in space.The future portrayed, although not shown to be either a military or a police state, is one which is quite ruthless when it comes to doing what is necessary. The military would seem to have a lot of power, and they are willing to lie and manipulate people, and recruit children into the military at what would have been considered far too young an age, in order to save the world - with the argument being if they didn't, there wouldn't be any children left to protect. It shows that, when the choice is between survival and morals, morals can easily get thrown out of the window, with the intention of getting them back at a later point when humanity's survival is no longer on the line. The film itself is has some impressive space combat scenes, and the weightless scenes in Battle School are quite effective and actually look genuine.Some of the ending from the book has been kept in, although shortened and slightly altered, for one thing, it happens years earlier and in a different place than in the novel, and this is quite important, more from a philosophical point than for the actual story, as missing it out would have missed some of the point of the story.Will there be a sequel or even a prequel to this? Well, there could be, as there are quite a few novels in the Enderverse, both from the main Ender series and from the Shadow series. The real problem is that most of the novels in the Ender series are of a different type to Ender's Game, as this effectively military science fiction and the others are far more philosophical, although Ender's Game does still have quite a bit of philosophy and the contemplation of morals and whether war justifies everything that is done in order to survive. A notable exception could be Ender's Shadow, which runs mostly parallel to the events in Ender's Game and covers Bean's story. Other than that, Ender's Game is a good science fiction film, that shouldn't disappoint those familiar with the novel. 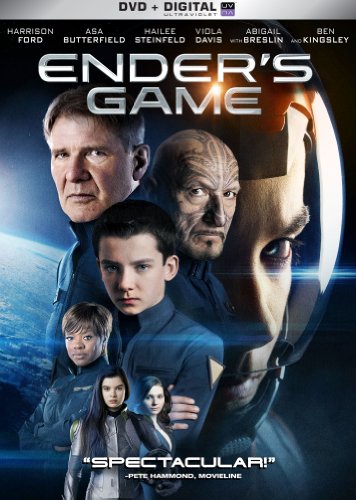