Buy Fast Five cheaply from Amazon, or read more articles on film and television. You too can earn money from writing articles by signing up for InfoBarrel.
InfoBarrel is a writing platform for non-fiction, reference-based, informative content. Opinions expressed by InfoBarrel writers are their own.
InfoBarrel > Entertainment > Film > Movies

Certificate 12A, 130 minutesDirector: Justin LinStars: Vin Diesel, Paul Walker and Dwayne JohnsonFast Five (also know as Fast & Furious 5) is the latest film in the Fast and the Furious film franchise. The film sees a lot of characters return, some of whom have only appeared the once. Vin Diesel (Fast and Furious 7, Guardians of the Galaxy) stars as Dominic Toretto, Paul Walker as Brian O'Conner and Jordana Brewster as Mia Toretto. Tego Leo as Tego Calderon and Gal Gadot as Gisele Harabo were both seen in Fast and Furious. Chris "Ludacris" Bridges as Tej Parker and Tyrese Gibson as Roman Pearce were previously in 2 Fast 2 Furious and Matt Shulze returns as Vince, a role he hasn't played since the original film. Even Sung Kang returns reprising his role as Han Lue from The Fast and the Furious: Tokyo Drift (even though he apparently died in that film) and Fast & Furious.

Credit: http://en.wikipedia.org/wiki/File:Fast_Five_poster.jpgThe film starts where Fast & Furious ended; with O'Connor and his team about to break Toretto out after he was sentenced to prison by hijacking the prison bus - using fast cars naturally. After freeing Toretto they all flee the country with O'Connor and Mia ending up in Rio. There, strapped for cash, they meet up with Vince again and are joined by Toretto in order to steal some cars from a train. As a result of this, Toretto and O'Connor recruit the team of people previously mentioned, and a couple more, in order to pull one last job against local crime kingpin and drug baron Hernan Reyes (Joaquim de Almeida).They are also being pursued by the US Diplomatic Security Services agent Luke Hobbs (Dwayne "The Rock" Johnson, G.I. Joe: Retaliation, Hercules) and his team who intend to catch them and take them all back to the US. Hobbs is the sort of US agent guaranteed to annoy the police of any foreign nation - loud, overbearing and arrogant - even if he is good at his job.Although Dwayne Johnson's hard man role doesn't require him to use much of his acting skills (and he is actually quite good at acting; possibly a legacy of being a WWF professional wrestler) but he provides a good counterpart to Vin Diesel's similar hard man role on the opposite side.There's a small scene in the middle of the credits (just before the obligatory "Copying the car chase scenes in this film in real life would be suicidally dumb" message) so be sure not to miss it. This scene suggested that there is definitely another sequel planned (which sequel has since been announced).Fast Five is not great art by any means. The final and main car chase in the film is definitely spectacular. The series has had no shortage of car chases, not surprising given the subject matter of the film series, but this is definitely one of the best. The film is less than flattering (or accurate) in its portrayal of Brazil and Rio de Janeiro though which did cause some complaints from both Brazil and Rio. Fast Five has lots of loaded fast cars (and the team seem to be able to readily lay their hands on supercharged, sometimes matching, cars at the drop of a hat) and car chases, with plenty of action, so good for fans of those types of films. One of the better films in the series. 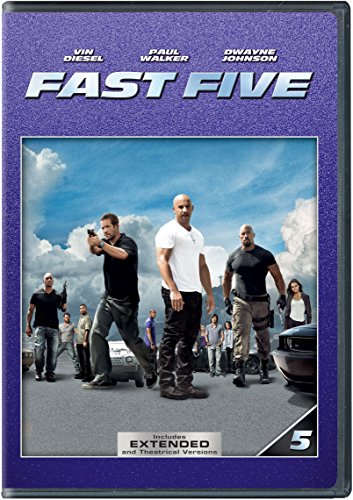