Get Fast & Furious 6 or or Fast & Furious 1-5 cheaply from Amazon. You too can earn money from writing articles by signing up for InfoBarrel.
InfoBarrel is a writing platform for non-fiction, reference-based, informative content. Opinions expressed by InfoBarrel writers are their own.
InfoBarrel > Entertainment > Film > Movies

Certificate 12A, 130 minutesDirector: Justin LinStars: Dwayne Johnson, Vin Diesel, Paul WalkerFast & Furious 6 is the latest, and least imaginatively named, in the Fast and the Furious franchise (the other films might not have hugely imaginative names, but at least they didn't take the name of a previous film and just tag a number on the end of it). During the end credits of the previous film, Fast 5, there was a short scene that revealed that Letty (Michelle Rodriguez, Machete Kills, Resident Evil: Retribution) seemed to be still alive, even though up until now she seemed to have been killed in Fast & Furious.After the events of Fast Five, the team has retired with the money they made from their heist in Brazil. Dom (Vin Diesel, Guardians of the Galaxy), Brian (Paul Walker) and Mia (Jordana Brewster) are living in the Canary Islands, and Brian and Mia have had a baby and the rest of the crew is living the high life. Agent Luke Hobbs (Dwayne Johnson, G.I. Joe: Retaliation, Hercules) approaches Dom with the news that Letty is still alive, and is working for Owen Shaw (Luke Evans), a former Spec Ops soldier and a major in the UK's (fictional) mobility division, whose team has been taking down military targets. In exchange for a full pardon, Dom, Brian, Gisele (Gal Gadot, Batman v Superman: Dawn of Justice, Triple 9), Han (Sung Kang), Roman (Tyrese Gibson, Ride Along 2) and Tej (Ludacris) agree to help Hobbs find and capture Shaw.

Credit: http://en.wikipedia.org/wiki/File:FastandFurious6-teaserposter.jpgMuch of the events take place in London, including a rather destructive car chase through surprisingly empty streets and, somewhat surprisingly, a street race - London being probably one of the worst places in the world to hold a street race give the density of the traffic, the sheer number of CCTV cameras (and the large number of cameras is actually mentioned in the film) and the congestion charge covering much of London linked to an automatic number plate recognition system (even if the charge only applies during the daytime, the technology is still there).As with all the films in the series, there are lots of car chases, one quite impressive and massively destructive one including a tank, and lots of - often slow and lingering - shots of fast cars (or car pr0n). Fast & Furious 6 continues with the series' trend towards even more destruction, and presumably death, with tons of explosions and gunplay - the series is hardly recognisable from its original car chase origins, with the sequels getting bigger and more explosive.During the beginning credits there is a montage of clips from the other films in the series, with the exception of Tokyo Drift from the looks of it (said film not really featuring the major characters from the films), either reminding you of what happened or trying to tell the story so far in a bunch of excerpts. Just when you think it's over there's a short scene with Jason Statham, setting up another sequel. Fast & Furious 6 may not have the best logical or in-depth plot for a film, but the non-stop action pretty much keeps you from realising that. 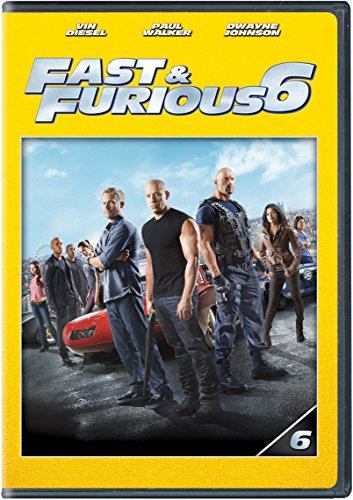