Buy Focus or the television series Hustle from Amazon. You too can earn money from writing articles by signing up for InfoBarrel.
InfoBarrel is a writing platform for non-fiction, reference-based, informative content. Opinions expressed by InfoBarrel writers are their own.
InfoBarrel > Entertainment > Film > Movies

Certificate 15, 104 minutesDirectors: Glenn Ficarra, John RequaStars: Will Smith, Margot Robbie, Rodrigo SantoroAt the beginning of Focus, Nicky (Will Smith, After Earth, Men in Black 3) is eating in a restaurant when he is approached by a young woman, Jess (Margot Robbie, The Wolf of Wall Street), who asks him to pretend to be her boyfriend in an attempt to ditch a man who is mauling her at the bar. One thing leads to another and the pair go to her room. As the situation starts to develop further, a man bursts in, wielding a gun and claiming to be Jess's husband. He is threatening to shoot Nicky - who takes it rather calmly, as he has already worked out that it's a con (and a rather standard one at that) being a con artist himself. Being susses out, Jess asks Nicky to teach her. He shows her a few simple pick pocketing tricks before leaving.

Credit: https://en.wikipedia.org/wiki/Focus_%282015_film%29#mediaviewer/File:2015_Focus_film_poster.pngNot long after, Jess hunts Nicky up in New Orleans where the Super Bowl is being held. Nicky is running a team of about thirty con artists and pickpockets doing lots of individually small scams, identity theft and pocket picking, all very professionally run with personal details and anything valuable stolen, or bought with stolen cards, sold on, and adding up to a reasonable chunk of change for each person for a week's work. Jess joins the team as an "intern" for the duration, but Nicky becomes a bit involved with her. The tricks and scams they are running are shown to a level of detail that is, frankly, quite scary to consider, and is quite likely to make you worried about taking anything valuable at all to any sizeable gathering.Three years after New Orleans and Nicky is now in Buenos Aires, where he has been hired by a racing team owner, Garriga (Rodrigo Santoro, 300: Rise of an Empire, The Last Stand), to help the latter's chances of winning by effectively sabotaging his main rival by supplying him with faulty information. Then Nicky bumps into Jess again and it seems that he was more affected by her in New Orleans than he ever let on. Especially when he discovers that she's Garriga's girlfriend.Focus resembles the British television series Hustle in more than a few respects. Nothing is ever what it seems to be, and sometimes after a more complicated scam is pulled off, it then goes back and explains what did actually happen, which is often different what appeared to happen. The con artists are not portrayed as villains (even though some of what they are doing is life-wrecking). One flaw with the film is the pacing. The first part of the film, in New Orleans, which turns out to be just a really, really long introduction that takes up a good chunk of the film, is fast paced. Everything is moving along snappily, the scams are being run, and it's non-stop. Then, when it gets to the second part in Buenos Aires, the pace dramatically slows down. There is no large team; just Nicky, Jess and one of the team from the first part, Farhad (Adrian Martinez), who makes a brief appearance. There is just one, slow plot to it at this point and, at times, it feels more like a romance.There are some funny bits in the film, in particular one scene where Jess and Nicky get into a verbal slanging match, having a go at each other, at what is a really, really inappropriate time for such. The scams are reasonably slick, and there are twists and turns to the plot, which you may, or may not, see coming before they are revealed. Some are comparatively easy to spot; others are not. The substantially different pacing between the two parts of the film, though, make it feel like two different films that have been imperfectly glued together. Focus isn't a bad film, and there are some good bits, but what it really feels like is a poor cinematic version of an episode of Hustle - and if you've seen Hustle, you will have seen better. 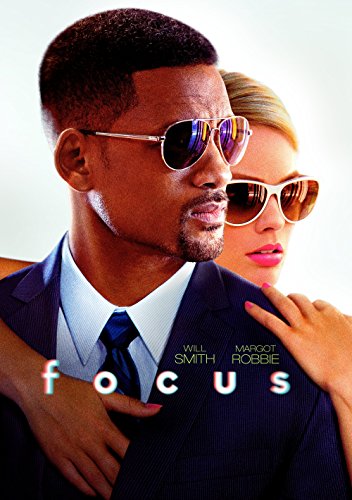