Watch Fright Night now, or read more articles on film and television. You too can earn money from writing articles by signing up for InfoBarrel.
InfoBarrel is a writing platform for non-fiction, reference-based, informative content. Opinions expressed by InfoBarrel writers are their own.
InfoBarrel > Entertainment > Film > Movies

15 certificate, 106 minutesDirector: Craig GillespieStars: Anton Yelchin, Colin Farrell and David TennantFright Night is a remake of the original 1985 film of the same name. Set in Las Vegas, Charlie Brewster (Anton Yelchin, Star Trek Into Darkness) is a teenager living with his mother. Charlie's former best friend, Ed Thompson (Christopher Mintz-Plasse, ParaNorman, Kick-Ass 2) is convinced that Charlie's new next door neighbour, Jerry Dandridge (Colin Farrell, Total Recall, Seven Psychopaths, Dead Man Down) is actually a vampire and responsible for the recent disappearances of various classmates. Ed has plotted out all the recent disappearances onto a map, and they converge next to Charlie's house.Charlie is not convinced - "That is a terrible vampire name, Jerry?" He has stopped seeing Ed in an attempt to fit in with the other, cooler kids and with the idea that disowning his nerdy past will impress his girlfriend Amy (Imogen Poots, A Long Way Down, Need for Speed). He only agrees to help Ed after Ed threatens to release some old videos of them in science fiction costumes on the internet. Ed says that Las Vegas is an ideal location for a vampire to live; there's a large transient population, residents move all the time and, due to the casinos, people who only come out at night and stay in their house during the day with their windows blacked out are hardly unusual.

Credit: http://en.wikipedia.org/wiki/File:FrightNight2011Poster.jpgCharlie's opinion changes, however, when Ed goes missing. He starts looking into Ed's research, as well as watching Jerry and breaking into his house, and behaving in a way that his girlfriend and mother consider more than a little odd, as an out-and-out statement that their neighbour is a vampire is likely to be met with scepticism.Charlie contacts stage magician and supposed authority on vampires, Peter Vincent (David Tennant), who performs at the Hard Rock Hotel and Casino in the Fright Night show, and whose website Ed had consulted for vampire lore. Vincent considers Charlie to be deranged, even though he has a large collection of items based on the supernatural, and Charlie is less than impressed with Vincent, who more closely resembles an alcoholic than any vampire hunter and master of darkness.Whilst Charlie has been watching Jerry, Jerry has also been watching Charlie, vampires being quite good at behaving stealthily themselves. After Jerry attacks Charlie and his mother and girlfriend at Charlie's house, Charlie realises that the only way of escaping Jerry is by going after him and killing him first. He tools up and goes vampire hunting.Like the original Fright Night, this remake is also classed as comedy horror, although there does seem to be less comedy in this version. Sure, some bits are less than serious, but it's not really a comedy, although neither is it truly frightening.Fright Night is an okay remake of the original. There is nothing exceptional about the film. Technology has improved since the original was made, and consequently so have the effects in the film. This is a fairly mindless watch - it plays out pretty much the way you'd expect, especially if you saw the original Fright Night. 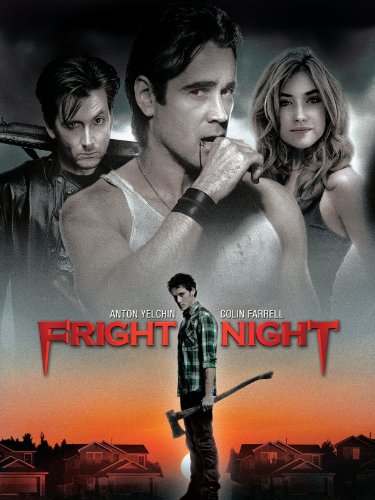