Buy Fury cheaply from Amazon. You too can earn money from writing articles by signing up for InfoBarrel.
InfoBarrel is a writing platform for non-fiction, reference-based, informative content. Opinions expressed by InfoBarrel writers are their own.
InfoBarrel > Entertainment > Film > Movies

Certificate 15, 134 minutesDirector: David AyerStars: Brad Pitt, Shia LaBeouf, Logan LermanFury is set in the closing weeks of the European campaign in World War II, in April 1945 in Germany. First Sergeant Don 'Wardaddy' Collier (Brad Pitt, Killing Them Softly, The Counselor, World War Z) is the commander of a US M4A3E8 Sherman tank, nicknamed "Fury". The US tanks are suffering quite badly from the last remaining, but far superior, German tanks. Wardaddy's tank is in the 2nd Armoured Division of the US Ninth Army. His tank's campaign started off in Africa, then moved through Europe after the Normandy landings. Wardaddy has a passionate hatred of the SS, killing them on sight.

Credit: http://en.wikipedia.org/wiki/Fury_%282014_film%29#mediaviewer/File:Fury_2014_poster.jpgAt the beginning of the film, the rest of Fury's platoon was destroyed, and the tank had lost its assistant driver/bow gunner. Wardaddy and the three surviving members of his crew - gunner Boyd 'Bible' Swan (Shia LaBeouf), loader Grady 'Coon-Ass' Travis (Jon Bernthal) and driver Trini 'Gordo' Garcia (Michael Peña, Ant-Man, End of Watch, The Martian) - join another. They also get a new assistant driver/bow gunner, Private Normal Ellison (Logan Lerman, Percy Jackson: Sea of Monsters, The Three Musketeers), a recently enlisted clerk-typist with no experience or training in tanks and who is completely unprepared for what it will entail. As a consequence, Norman is hassled by the other crew, who hold him in little respect. When the lieutenant in command of Wardaddy's platoon is killed, he is the one who takes charge of it. Norman's first experience of combat is against the children of the Hitlerjugend, as Nazi Germany throws everything, and everybody, remaining into the conflict. Children who refuse to fight are executed by the SS.The climax of the film comes when Fury is sent to defend a crossroads in order to protect the supply train from oncoming German troops. The tank loses a track when they hit a mine, crippling them and rendering it immobile. With the Germans coming, Wardaddy decides to continue with his mission, as the tank's guns still work, resulting in a desperate and bloody battle to the finish.The film is often brutal, inhuman and gory, with what would be considered atrocities committed by both sides (and this may be an area where, not for the first time, Hollywood inaccurately portrays historical events, as one of the film's technical advisors, a former World War II tank gunner, stated that there are scenes worse than anything he witnessed[1]). It doesn't glamorise war at all, depicting it as nasty, sometimes necessary and often desperate. It is probably, as a consequence, a more realistic depiction in some respects than many others.This isn't just a war film. Private Norman, through the course of their journey, discovers comradeship as he becomes accepted as one of the crew and loss and it is, in some ways, a coming of age film, even if the coming of age is in a violent, dangerous and brutal environment. The scenes are often extremely gory, which is only justified in this case, and there is a lot of, often extreme, violence. Fury is a brutal, sometimes horrific, film, but one of the better World War II stories out there, even with the purported escalation of the events of the actual war. 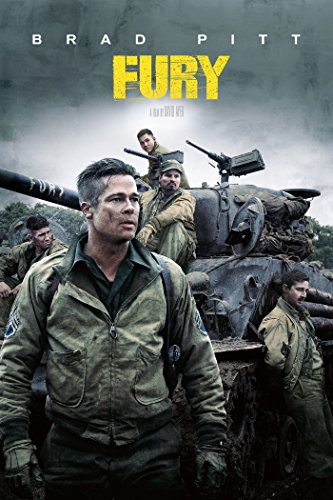