Buy G.I. Joe: Retaliation and G.I. Joe: The Rise of Cobra cheaply fom Amazon. You too can earn money from writing articles by signing up for InfoBarrel.
InfoBarrel is a writing platform for non-fiction, reference-based, informative content. Opinions expressed by InfoBarrel writers are their own.
InfoBarrel > Entertainment > Film > Movies

Certificate 12A, 110 minutesDirector: Jon M. ChuStars: Dwayne Johnson, D.J. Cotrona, Channing TatumG.I. Joe: Retaliation is the sequel to the 2009 film G.I. Joe: The Rise of Cobra. At the end of The Rise of Cobra, both Cobra Commander and Destro had been captured and imprisoned and it certainly appeared that the master of disguise, Zartan (Arnold Vosloo), had replaced the President of the United States (Jonathan Pryce). Storm Shadow (Byung-hun Lee, RED 2, Terminator Genisys) also remained at large.After completing a mission in Pakistan, the G.I. Joes are betrayed by Zartan. Duke's (Channing Tatum) team is attacked by helicopter gunships; most of the G.I. Joes are killed and their bases were destroyed. It also turns out that Zoltan hasn't actually killed the President for some reason, which certainly seemed to be his likely action at the end of The Rise of Cobra.

Credit: http://en.wikipedia.org/wiki/File:G.I._JOE_Retaliation.jpgZoltan's aim now that he is President is that of many criminal masterminds - world domination. Not terribly original really. The Joes that weren't killed in the ambush, led by Roadblock (Dwayne Johnson, Fast Five, Fast & Furious 6, Fast and Furious 7, Hercules) return to the US to see what happened to the President. Roadblock says he knows someone they can trust who will help, retired US General Joe Colton (Bruce Willis). Quite a lot of the major characters from the first film didn't make it into the sequel, and at least one that did was played by a different actor. Even though Vosloo reprised his role as Zartan, he had very little screen time as he was usually disguised as the President, so in fact Pryce played the majority of Zartan's role in the film. New characters for the Joes are Lady Jaye (Adrianne Palicki) and Flint (D.J. Cotrona).Retaliation was originally scheduled for release in 2012, but this was delayed until 2013 due to Paramount's decision to convert the film to 3D, and apparently build up more international interest,[1] by which time there had already been trailers and advertising released and merchandise waiting for the launch of the film. Remaking the film in 3D undoubtedly increased the film's expenses and quite possibly wasn't justified in terms of extra revenue. This delayed release meant that there were two advertising campaigns and the studio had to wait another year before getting a return on the investment. Those who liked the original may have been less likely to watch the sequel due to the added wait. It is quite possible that this decision may have reduced the profits, even though it has done fairly well commercially.The 3D was rarely readily apparent; it was most noticeable in certain slowed down fight scenes between Snake Eyes (Ray Park), Jinx (Elodie Yung) and a number of red clad enemy ninjas that were fought on the side of a mountain. It certainly didn't seem worth delaying the release for another year and the extra expense of converting the film to do. In The Rise of Cobra, the Joes were depicted as an international team, although with what appeared to be a majority US contingent; in the sequel, they appear to be solely American, with no international members and solely doing the bidding of the US.Retaliation often does not make a huge amount of sense if you stop and think things through. How was Zoltan able to replace what looked like a large number of US military and security personnel with what are presumably Cobra troops and, having done so, why not replace anyone else in a position of power around him? He gives orders one minute, then claims that those who followed them were acting without orders the next, even though there were people present on both occasions who knew that that was not true. Why pick your most dangerous ally to attack first, rather than your most dangerous enemy? Dwayne Johnson is also somewhat wasted; despite his tough guy roles, he's actually a pretty decent actor, although that may not be surprising as he came from professional wrestling. G.I. Joe: Retaliation is quite fun, with lots of explosions and action, but rather nonsensical with very little plot; best to park your brain at the door and just enjoy the stuff going boom. 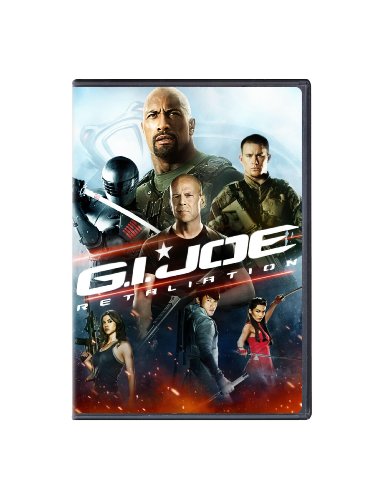