Buy Get Hard cheaply from Amazon. You too can earn money from writing articles by signing up for InfoBarrel.
InfoBarrel is a writing platform for non-fiction, reference-based, informative content. Opinions expressed by InfoBarrel writers are their own.
InfoBarrel > Entertainment > Film > Movies

Certificate 15, 100 minutesDirector: Etan CohenStars: Will Ferrell, Kevin Hart, Alison BrieGet Hard briefly opens with James King (Will Ferrell, The Internship, The Lego Movie) in tears, before going back a month. James has got everything he wants. He has a large, very nice house, a good job - he's a senior fund manager at Wealthrop Fund Management and is just about to be made partner - and a beautiful fiancée Alissa (Alison Brie), who is also his bosses daughter. Fortunately, he also has a good relationship with his boss, Martin (Craig T. Nelson). James is not as popular with his household staff, or with some of his fellow employees.Darnell (Kevin Hart, Central Intelligence, Ride Along 2, The Wedding Ringer) has a rather different life. He is the founder and CEO of Hollywood Luxury Bubbles, which means he washes James's car, although he does have other people working for him. Darnell is looking to raise $30,000 so that he can buy a new house and get his daughter into a better school, but he is having problems borrowing the money.

Credit: https://en.wikipedia.org/wiki/Get_Hard#/media/File:Get_Hard_film_poster.pngThen James's life falls apart. At his engagement party, the FBI arrive and arrest him on multiple counts of fraud and embezzlement. They have the trading records to prove he is guilty, and James refuses to plea bargain, convinced that the jury will exonerate him, as he states he isn't guilty. This doesn't work, and the judge is sick of white collar criminals getting minimal sentences, so James ends up being sentenced to ten years in San Quentin. This is why he was crying at the beginning of the film. He is given 30 days to get his affairs in order before he goes away, and this starts counting down.When Darrell finds James hiding in the boot of the latter's car, they discuss prison, and Darnell tells James that prison is just as bad, if not worse, than it is made out to be, and that James has absolutely no chance of surviving inside. James asks Darnell if he will teach him how to survive inside - like Darnell did. James making the assumption that, statistically, Darnell has been to prison. Only Darnell has not been inside, as can be quite easily seen, especially when he tries to act gangsta with his wife and gets slapped for it. His explanation of how he ended up inside, when asked for it, is the plot of a film. James does not twig to it.So begins an intensive regime where Darnell, getting information from a cousin of his who has been inside, starts training James on how to survive in prison. This includes turning James's palatial home into a prison, and his staff into inmates and guards. Which is something they really enjoy doing. During the process, James gets exposed to many different things that he will supposedly have to do inside, and also gets introduced to some genuine gang members, so that he will have extra protection. Darnell and James also start to become friends, and James also seems to be, once you get to know him, quite a nice person. Too nice to have done what he has been found guilty of in fact.Kevin Hart is, well, Kevin Hart - a small, overexcited, fast talking person. This may in time get old, but at the moment still works. The height difference between him and Will Ferrell is really noticeable, as Ferrell is tall and Hart definitely isn't, so there's nearly a foot difference. Which does make it funny when the two are facing off. Although the film has a lot of crude language, which is probably a large factor in its high certification, the humour is, rather surprisingly, generally not crude. There are a lot of double entendres that are based around the title of the film, but that's rather more subtle than comedies usually go for. A couple of times in the film, James is discussing investing (using a couple of bricks of cocaine as seed money!) and tax planning with the members of the gang who are going to be giving him protection inside, a rather appealing dichotomy. Get Hard will not appeal to all, but it is at times funny and endearing. 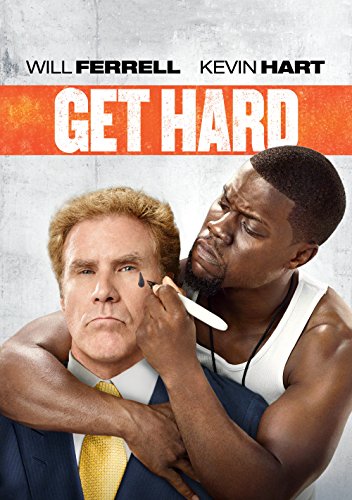