Buy Godzilla or look for more Godzilla merchandise on Amazon. You too can earn money from writing articles by signing up for InfoBarrel.
InfoBarrel is a writing platform for non-fiction, reference-based, informative content. Opinions expressed by InfoBarrel writers are their own.
InfoBarrel > Entertainment > Film > Movies

Certificate 12A, 123 minutesDirector: Gareth EdwardsStars: Aaron Taylor-Johnson, Elizabeth Olsen, Bryan CranstonGodzilla starts with the title credits consisting of documents and newspaper articles related to the atomic bomb tests in the 1950s in the Pacific at places like Bikini Atoll, as well as pieces of film showing a giant reptilian creature, a creature that is dubbed Godzilla, before opening in the Philippines in 1999. At a quarry there, an enormous underground cavern that is highly radioactive has opened up under the site, and Dr. Ichiro Serizawa (Ken Watanabe) of an organisation called Monarch - which was referenced in the title sequence - is called in to investigate. Inside the cavern is the fossilised skeleton of some monstrous beast - as well as a couple of spores, one of which appears to have hatched.Joe Brody (Bryan Cranston, Drive, Larry Crowne) works at a nuclear plant in Janjira, Japan, where he is the chief engineer. Disturbed by odd seismic readings, he wants to shut the plant down before it's too late. Unfortunately, it is already too late. 15 years later and Brody's son, Ford (Aaron Taylor-Johnson, Avengers: Age of Ultron, Kick-Ass 2) is now a lieutenant in the US Navy working in Explosive Ordnance Disposal. He is returning home to San Francisco to his wife, Elle (Elizabeth Olsen, Captain America: Civil War, Red Lights) and son, Sam (Carson Bolde), after an 18 month deployment overseas.

Credit: https://en.wikipedia.org/wiki/File:Godzilla_%282014%29_poster.jpgFord's relationship with his father is more than a little strained these days because of the latter's behaviour since the disaster that affected his plant. Joe Brody is behaving like a classic obsessive and paranoid conspiracy theorist, who is also suffering from guilt over the meltdown. Convinced that something is being hidden and covered up at Janjira, he gets arrested for trespassing in the quarantined area. Something was being hidden and studied - and it gets out. A force led by US Navy Admiral Stenz (David Strathairn), tracks what escaped and followed as is heads across the Pacific to San Francisco - where Ford's family is. Just because you're a conspiracy theorist doesn't make you wrong.Godzilla is available in both 2D and 3D, with the 3D version being the one watched. Apart from the title sequence and on-screen labels for places, the 3D did not appear to add anything to the film, or indeed be noticeable. Godzilla is a classic Japanese kaiju ("strange creature")[1] monster who has been in something like 32 films in a major role, not counting any minor roles or other media, but kaiju have been not as successful in Western films to date, with the exception of Cloverfield. Even though the 1998 film did quite well at the cinema, it was not well received and the planned sequels were cancelled.Visually, this film is very impressive, even with a rather tubby looking Godzilla, who looks like he should tone up a bit. There are spectacular and, considering they involve a giant monster, quite realistic looking battle sequences that result in San Francisco coming off rather the worse for wear. Godzilla's abilities are a bit improbable, and the science used to explain his existence seems a bit on the dubious side, but kaiju are not the most logical creations around, and this does seem to be staying true to their concept.Ford is more of a focal character, who the story revolves around and who is involved in much of it, than a heroic one, especially as he often doesn't really seem to be doing his job on a number of occasions but is more involved in following his own agenda. Elle Brody does not appear to have much of a role at all, but this is not really the sort of film that is watched for character development. The film also doesn't unfold in quite the way you would expect, with a definite moment of something being rather different quite early on. All in all, Godzilla is an enjoyable action filled film that passes quickly despite its length. 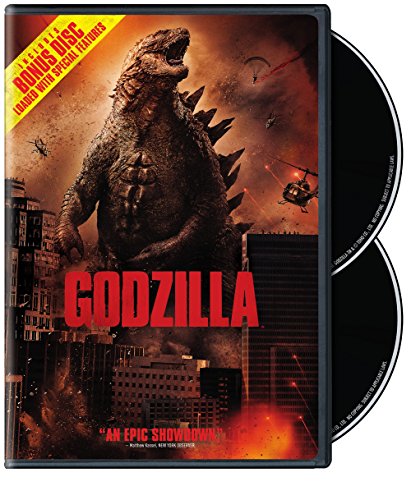