Buy Gravity cheaply on Amazon, or read more articles on film and television. You too can earn money from writing articles by signing up for InfoBarrel.
InfoBarrel is a writing platform for non-fiction, reference-based, informative content. Opinions expressed by InfoBarrel writers are their own.
InfoBarrel > Entertainment > Film > Movies

Certificate 12A, 91 minutesDirector: Alfonso CuarónStars: Sandra Bullock, George Clooney, Ed HarrisGravity is set during the Explorer STS 157 mission. Explorer is presumably a second generation space shuttle, and the film would therefore appear to be set at least a few years in the future. Mission Specialist Dr. Ryan Stone (Sandra Bullock, Minions, The Heat) is working at the end of the robot arm to perform upgrades on the Hubble Space Telescope and Mission Commander Matt Kowalski (George Clooney, The Monuments Men) is flying around the shuttle in a new generation Manned Maneuvering Unit (MMU).Houston (Ed Harris, Man on a Ledge, Run All Night) warns them that a Russian satellite that has been destroyed by a missile has caused a chain reaction that is sending a debris cloud hurtling around the Earth, destroying any satellite it comes across which in turns causes the cloud to expand. Debris from the cloud hits Explorer, badly damaging it, and one debris piece snaps the arm that Stone is attached to, sending it spinning off into space.

Credit: http://en.wikipedia.org/wiki/File:Gravity_Poster.jpgWith their ride home unusable, Stone and Kowalski have no choice but to head to the, relatively nearby International Space Station (ISS) or the, as yet not constructed, Chinese Tiangong space station (the number of which isn't named, but it would likely have to be at least Tiangong 3), one of which will hopefully have a functioning emergency vehicle that can be used to safely return to Earth. What makes things worse is that the debris has destroyed enough communications satellites to put Stone and Kowalski out of contact with Houston, or anyone else.Debris from accidents and previous missions, such as that from the destroyed Russian satellite in the film, is a very real and growing problem, with over 21,000 pieces of debris larger than 10cm in size, 500,000+ between one and ten centimetres and probably millions of smaller particles.[1] In 2007 a Chinese anti-satellite weapon test - rather similar to the way the Russian satellite was destroyed in the film - created 2,317 pieces of debris of  golf ball size and above, and an estimated 150,000 particles in total.[2] This debris cloud later hit a Russian satellite[3] and the ISS has had to avoid the debris cloud on several occasions.[4]Oddly, at the start of the film, the distance above the Earth is stated in kilometres, and the temperature is stated in Fahrenheit. This is odd because a lot of people will likely only understand one of the measurements, not both. One of the most common errors in space films is that of hearing sounds in a vacuum, which does not happen in Gravity. However, because this error is so commonplace audiences actually expect to hear sound in vacuum, even if it is wrong. This film gets around that in a couple of ways without actually getting it wrong. The first is that only conducted sound that is essentially "felt" by touching something is "heard" when the astronauts are touching something that gets hit. The second way is by using the music to create a similar tension and experience, which it does very well.Gravity is available in both 2D and 3D with the 2D version being the one watched. It has what is essentially a very limited cast - really, only Bullock and Clooney - with everyone else just a voice on the radio, and even those soon vanish, so everything depends on Clooney and Bullock's performance. Fortunately, they do a great job. The film looks great, the effects are spectacular and realistic, never mind all the shots of Earth from space, and the effects of micro gravity in those situations where it would apply look very genuine. There are a few errors with the science in the film, and the director admits that some things were altered to make the story work, but you would have to have a fairly high level of expert knowledge to spot them - and even some who did still enjoyed it.[5] Gravity is a great film full of tension that isn't really science fiction so much as a film set in a space environment. 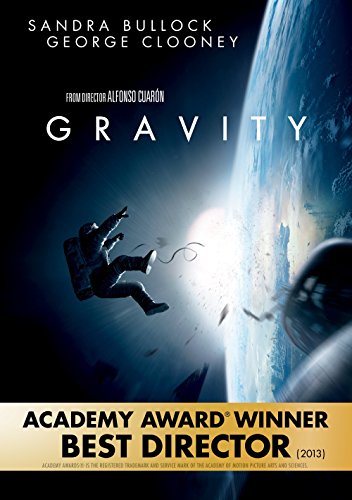