Buy Grimsby cheaply from Amazon. You too can earn money from writing articles by signing up for InfoBarrel.
InfoBarrel is a writing platform for non-fiction, reference-based, informative content. Opinions expressed by InfoBarrel writers are their own.
InfoBarrel > Entertainment > Film > Movies

Certificate 15, 83 minutesDirector: Louis LeterrierStars: Sacha Baron Cohen, Mark Strong, Rebel WilsonGrimsby, or, in the United States, the slightly confusing titled The Brothers Grimsby (as the brothers aren't called Grimsby; Grimsby is instead the Northern English town where Nobby lives and the brothers were born) opens with Nobby Butcher (Sacha Baron Cohen, Hugo) and his girlfriend, Dawn (Rebel Wilson, Night at the Museum: Secret of the Tomb), buying a new mattress - by testing it out first in the shop. Nobby is an ardent England and Grimsby Town football supporter, and he has been looking for his younger brother, Sebastian, for the past 28 years, since they were separated when Sebastian was six. Nobby has left his brother's bedroom as it was, despite really needing the space for his nine, terribly named (Britney is one of the best; other names include Skeletor, Gangnam Style and Django Unchained), children, and has a wall dedicated to his brother as well.Sebastian (Mark Strong), who is now a Commander in the black ops Tiger Tail unit of Britain's MI6, has basically forgotten his brother, and also has the different surname Graves. He starts the film chasing down an operative of the Maelstrom Syndicate to get information out of him. Thanks to Sebastian's contact lens camera, much of this initial scene resembles a first person shooter. He gets the information, which reveals there is going to be an assassination attempt against Rhonda George (Penélope Cruz, The Counselor), a former actress turned philanthropist who is hosting an event for her WorldCure organisation, which aims to cure the world of disease, in London.

Credit: https://en.wikipedia.org/wiki/File:The_Brothers_Grimsby_poster.pngGraves heads to London to stop the assassination. Nobby has discovered that his brother is going there, and heads there too, interrupting Graves at an inconvenient time. The reunion does not therefore happen as Nobby intended, with his younger brother being annoyed rather than pleased to see him. Rhonda George isn't killed, but someone else is, and when it is investigated by Tiger Tail, Graves is believed to be the one responsible. The unnamed boss of Tiger Tail (played by Ian McShane), sends a ruthless killer, Chilcott (Sam Hazeldine), to hunt down and kill Graves. The only person who seems to believe him innocent is Jodie (Isla Fisher, Now You See Me), who plainly has feelings for Graves.Needing to hide out from his own people, as well as finding out what Maelstrom and its mysterious leader is up to, Graves is invited back to Grimsby by Nobby. Nobby, being basically an idiot (although one with an ability to get on with many different types of people), doesn't keep this a secret, and Chilcott and his killers soon track Graves down. With his hiding place blown, and with Jodie having tracked the actual assassin to South Africa, Graves heads to Cape Town. Nobby has to accompany him, for if he stays behind, Chilcott will likely kill him, and all his family. This all takes place against the background of the 2016 World Cup, and Nobby, devoted fan that he is, takes in the matches at often quite inappropriate times. As the brothers progress around the world, leaving a trail of devastation  in their wake, Sebastian has flashbacks to his early childhood with Nobby and, as could have been guessed, starts to warm to his brother again. All that can stop Maelstrom from carrying out a potentially destructive attack of global consequences is a secret agent whose own people are trying to kill and his idiot brother. Or course, they are going to succeed.The titular town of Grimsby is not portrayed in a particularly flattering light, which may cause problems with residents of the town. In a previous film made by Cohen, Borat, the people of Rumanian village took offence to how they were portrayed and the government of Kazakhstan, the country where Borat was supposed to be from and who he was making the film for, also took offence to it (at least initially; it provided a boost in tourism to the country). Or maybe it won't; Britain is the country, after all, where some people complained when where they lived was left out of a book entitled Crap Towns: The 50 Worst Places to Live in the UK (naturally others complained about being in it). Still, if a place is going to be portrayed in a negative light, perhaps it's better to use a fictional one rather than a real one.Not many of the characters other than Nobby or Sebastian really have much in the way of screen time, and a lot of people who do appear on the screen at the same time are typical redshirts whose only reason for being there is to die. Not even Nobby's girlfriend Dawn or Sebastian's potential love interest Jodie are seen that much, though the latter does spend quite a bit of time speaking to the brothers via whatever method is being used to communicate (this can vary). Of them all, Jodie is probably seen the most. This film is about Nobby and Sebastian's relationship, both former and current, rather than their relationship with anyone else. This is not that unusual a film for Cohen, as he frequently does comedies, even if an action comedy is a bit different to his normal fare. This is rather more different fare for Strong, who isn't exactly known for his comedic roles.The soundtrack noticeably sticks out for its use of Nineties tracks, but one from the Eighties by Madness can be easily noticed. There are a number of known British comic actors who essentially have cameo roles as friends and neighbours of Nobby, and a couple of people who don't actually appear in it, despite appearances (which is announced in the credits, just before the mid-credits scene). Nobby may be a family man, but this is really, really not a family film. There is an awful lot of bad language, sexual and drug references and use, and some scenes that are more than a little crude in nature. For a lot of viewers, this is going to be one of those films that you either love or hate, depending on whether or not they like the type of humour used in the film. Some will, some won't, but Grimsby is certainly not a film to watch for those who find crudity and violence offensive. 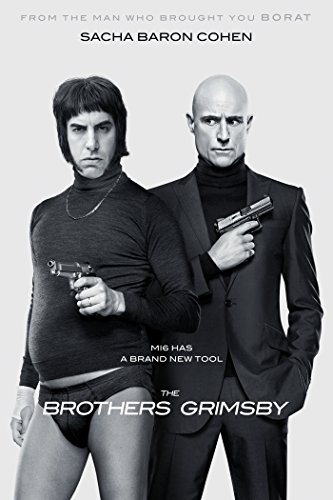