Certificate 15, 88 minutesDirector: Tommy Wirkola Stars: Jeremy Renner, Gemma Arterton and Peter StormareHansel & Gretel: Witch Hunters features a fairly traditional start to the story. The young siblings Hansel (Cedric Eich) and Gretel (Alea Sophia Boudodimos) are led into the forest by their father (Thomas Scharff) and abandoned. In the forest they find a candy house which a witch (Monique Ganderton) lives in. They are captured and Gretel is forced to work as a slave for the witch whilst Hansel is fattened up to be eaten. The pair push the old witch into her oven, killing her. This is pretty standard and overall similar to the fairy tale but this is only the beginning of the story. Having killed one witch they have got a taste for it and become with hunters - for a price, of course.

Credit: http://en.wikipedia.org/wiki/File:Hansel_and_Gretel_Witch_Hunters_.jpgThe story continues many years later with a now adult Hansel (Jeremy Renner) and Gretel (Gemma Arterton) arrive in the town of Augsburg -  a real place in Bavaria, Germany - having being hired by the local mayor, Engleman (Rainer Bock) much to the disgust of Sheriff Berringer (Peter Stormare, The Last Stand) after a recent outbreak of witch attacks resulted in the kidnap of many of the local children. A rather powerful witch, Muriel (Famke Janssen, Taken 2, Taken 3), is behind it. Incidentally, the Blood Moon referred to in the film is fictional; the Blood Moon is also called the Hunter's Moon and is the first full moon after the Harvest Moon.Hansel and Gretel use a lot of what is basically steampunk weaponry and equipment (similar in some ways to that seen in Van Helsing) such as a wind up Taser and the film is pretty violent and gore splattered - people's heads exploding or otherwise being reduced to pulp seems to be a favourite. The gore is pretty over the top and therefore more than somewhat unrealistic. The film is not a reworking of the traditional Brothers Grimm Hansel and Gretel fairy tale but instead covers the story of what they did next after the end of the fairy tale.One thing that might cause the film problems is its certification. It has a 15 certificate, but it feels like it was trying for a 12A, so could lose out on what looked like views from its targeted audience. There was just a bit too much gore, and one bit of partial nudity, for it to get a 12A certificate, as well as the violence and strong language. Hansel & Gretel is available in both 2D and 3D; the 3D version was the one watched. The 3D was most noticeable in the fight scenes where projectiles and bits of scenery were flying around in a somewhat slowed down state, and during the, pretty extensive and quite good, initial title sequence which was an animation. Hansel & Gretel: Witch Hunters is not a great film by any stretch of the imagination, and certainly not historically accurate for the period, but still it's gore splattered and violent fun. 3/5. 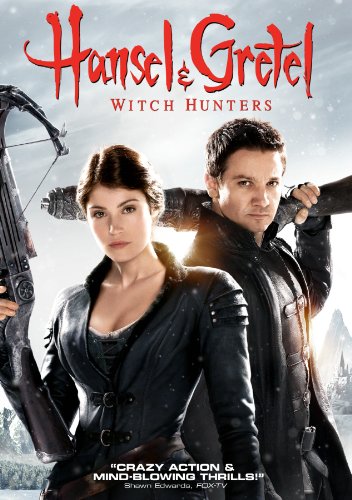