Buy Hardcore Henry cheaply from Amazon. You too can earn money from writing articles by signing up for InfoBarrel.
InfoBarrel is a writing platform for non-fiction, reference-based, informative content. Opinions expressed by InfoBarrel writers are their own.
InfoBarrel > Entertainment > Film > Movies

Certificate 18, 96 minutesDirector: Ilya NaishullerStars: Sharlto Copley, Danila Kozlovsky, Haley BennettHardcore Henry opens with a view of three children, one of which throws a toy against a wall, breaking it. Then an adult (Tim Roth) appears, and crouches down, speaking to what is presumably another child, the one whose toy has just been broken, and saying "You little pussy." Then, there are the opening credits, which see lots of violence perpetrated in slow motion in red and black.Then the viewer comes to in a tank of clear liquid, whilst a woman walks around it. The initial colours are wrong, and the scene has two different views, until the woman adjusts an eye and the vision is natural, as are the colours. The person in the tank is rather badly damaged, and presumably was dead. They are missing half of their right arm, and half of their right leg. The arms that are left have tattoos on them. The woman, Estelle (Haley Bennett), attaches some highly advanced prosthetics to the missing limbs, welding them on, as well as disguising them, mostly, with skin. Estelle says that she's the wife of the man, who is called Henry, and she's used her work to rebuild him, $6 million man style. Henry was apparently in a bad way; his eyes are also apparently artificial, as is a chunk of his face and a lot of his insides. He has also lost his memory, but Estelle says that's normal, and hasn't got his voice yet. 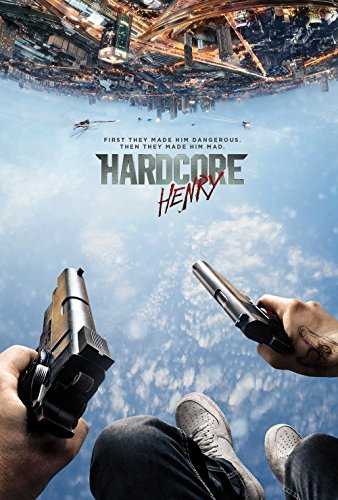