Get Haywire cheaply from Amazon, or read more articles on film and television. You too can earn money from writing articles by signing up for InfoBarrel.
InfoBarrel is a writing platform for non-fiction, reference-based, informative content. Opinions expressed by InfoBarrel writers are their own.
InfoBarrel > Entertainment > Film > Movies

Certificate 15, 93 minutesDirector: Steven SoderberghStars: Gina Carano, Ewan McGregor and Michael FassbenderHaywire stars Gina Carano (Deadpool) as Mallory Kane, a former US Marine who now works for an unnamed private security company run by Kenneth (Ewan McGregor), Jack the Giant Slayer, Mortdecai) which is hired by the US government to do operations that need to be not exactly official, said operations being handed out by Alex Coblenz (Michael Douglas, Ant-Man, Last Vegas). Mallory is one of the company's best operatives, although operations are carried out in teams rather than solo.Gina Carano has not done much acting to date; she is most well known for being the Gladiator Crush on the television seris American Gladiators. Given her physical expertise (Muay Thai and third best female Mixed Martial Artist in the world at her peak), it seems likely she did many of her own stunts, especially in the fight scenes.

Credit: http://en.wikipedia.org/wiki/File:Haywire_Poster.jpgA substantial amount of the film is told in flashbacks - where the character would be telling what had happened, this is shown. Initially, Mallory is in a diner in New York partway through the story when she is approached by colleague Aaron (Channing Tatum). After a violent confrontation, Mallory escapes in a car belonging to and with a customer, Scott (Michael Angarano), who was at the diner and the story to this point is told using flashbacks as Mallory explains what has happened to Scott. Why she decides to confide her involvement in what are likely at best quasi-legal secret operations on behalf of the US government in a total stranger, even one who had tried to help her, is never made clear.Mallory had been betrayed on her last mission before reaching the diner and a British agent, Paul (Michael Fassbender) who she had been teamed up with attempted to kill her and set her up for a murder she didn't do. Mallory starts tracking down the people who betrayed her which includes her boss Kenneth. The film after the timeline catches up to the escape from the diner in the car now follows a normal course for Mallory at least, although there are still flashbacks from other character’s points of view as Mallory questions them.Despite Haywire having a pretty decent cast with most of the supporting actors having a fair bit of experience, even if Gina Carano hasn't, as well as a director who's done some decent stuff in the past, the film is just a bit on the bland side. The roles of some of the supporting cast should probably have been increased, as many of them seem under utilized. The plot is sometimes a bit difficult to keep track of, to some extent thanks to the flashbacks as it isn't always obvious when these are set in the film's timeline, and for an action thriller, there just doesn't seem to be that much action - there is probably more action than there seems, but the film is just rather slow paced at times - and what there is is often not that thrilling. Haywire is adequate, but nothing more. 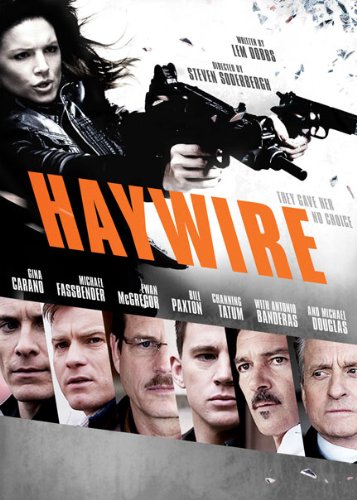