Buy the film Hercules or the television series Hercules: The Legendary Journeys cheaply from Amazon. You too can earn money from writing articles by signing up for InfoBarrel.
InfoBarrel is a writing platform for non-fiction, reference-based, informative content. Opinions expressed by InfoBarrel writers are their own.
InfoBarrel > Entertainment > Film > Movies

Certificate 12A, 98 minutesDirector: Brett RatnerStars: Dwayne Johnson, John Hurt, Ian McShaneHercules is based on the graphic novel Hercules: The Thracian Wars by Steve Moore, itself based on the legendary demigod and son of the god Zeus, king of the gods, Hercules (Dwayne Johnson, Fast Five, Fast & Furious 6, Fast and Furious 7, G.I. Joe: Retaliation). Set after Hercules' legendary twelve labours,[1] the film opens with a narration of several of his victories over mighty beast - probably because those sound better than a victory over a mighty stables - as Hercules has been hired to stop a group of pirates that are raiding and pillaging in Macedonia over 2,300 years ago.Hercules has been hired to stop the pirates because he is actually the leader of a group of mercenaries who fight for gold: The seer Amphiaraus (Ian McShane, Cuban Fury, Jack the Giant Slayer, Snow White and the Huntsman), the Spartan Autolycus (Rufus Sewell, Abraham Lincoln: Vampire Hunter), Tydeus (Aksel Hennie, The Martian), Hercules' nephew, the storyteller Iolaus (Reece Ritchie) and the Scythian archer Atalanta (Ingrid Bolsø Berdal), whose archery fighting method rather strongly resembles that of Legolas in The Lord of the Rings films. Hercules' legend is deliberately built up by the group, and some tricks are used by him to help enhance it, to make him seem more intimidating, because a scared enemy is a less effective one.

Credit: http://en.wikipedia.org/wiki/Hercules_%282014_film%29#mediaviewer/File:Hercules_%282014_film%29.jpgHercules is looking to retire, in peace and quiet - there are hints of a tragic past that do, to some extent, match those from the legend, although it does differ in both the detail and the timeline - so is looking for one last big payday, when Ergenia (Rebecca Ferguson, Mission: Impossible - Rogue Nation), the daughter of Lord Cotys of Thrace (John Hurt, Tinker, Tailor, Soldier, Spy), offers to hire them for his weight in gold to protect the land from a ruthless warlord, and reputed sorcerer, Rhesus (Tobias Santelmann) who is destroying villages and threatening Cotys' people. Hercules and his friends must defeat the warlord and save the people - all very heroic stuff, but they're working for gold, not for glory.The film is available in both 2D and 3D, with the 3D version being the one watched. It is visually spectacular, with lots of big, expansive battle scenes as well as those of individual combat, and the 3D is actually done very well for once, which is quite unusual for a live action film. Care seems to have been taken to pick camera shots, especially distance shots and close-up combat, to make the most of the 3D, so that it does actually add to the experience - something that so often isn't the case.Dwayne Johnson is, as is actually quite common, underutilised. He is big and physically impressive, and so works well portraying a classical hero famous for his strength and physical power, but this role doesn't really stretch his acting skills. And he is quite a good actor, possibly from his years as the professional wrestler The Rock, but he rarely takes on roles that utilise anything other than his physical abilities. The film also carries a moral message of sorts which is, rather unsubtly, hammered into the audience in the closing scene of the film. The others all fill their roles satisfactorily, even if the main role of the primary characters is to fight and kill the enemy - even Ian McShane's seer, despite attempts to expand this - so it doesn't require that much in the way of acting for them. There are also some attempts at injecting some humour at times, but these seem to clash quite badly with the rest of the film.Through the film what actually happened in Hercules' tragic past is discovered, which has a bearing on the film's outcome, and there is also a plot twist. Hercules isn't a bad film, and the action and combat sequences are certainly impressive; it just feels that it's lacking a certain something - maybe soul? - and that it could have been better. 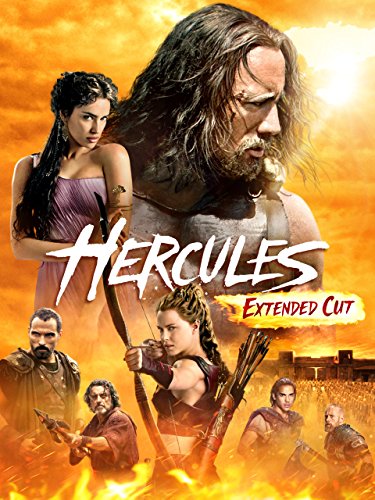