Get Horns or the book of the same name by Joe Hill cheaply from Amazon. You too can earn money from writing articles by signing up for InfoBarrel.
InfoBarrel is a writing platform for non-fiction, reference-based, informative content. Opinions expressed by InfoBarrel writers are their own.
InfoBarrel > Entertainment > Film > Movies

Certificate 15, 120 minutesDirector: Alexandre AjaStars: Daniel Radcliffe, Juno Temple, Max MinghellaHorns is based on the book of the same name by Joe Hill. Ignatius "Ig" Parrish (Daniel Radcliffe, The Woman in Black, Victor Frankenstein) is a radio DJ in the Washington state lumber town of Gideon Bay. He is not the cleanest living of people, and he certainly drinks too much. The person Ig feels closest to is his girlfriend, Merrin (Juno Temple, Maleficent). Prior to the start of the film, though, Merrin has been murdered and practically the entire town believes that he is the one guilty of her murder, although he hasn't been convicted of it and isn't even under arrest. Even Ig's parents seem to think he killed Merrin, and it doesn't help that he actually had what could be considered a reason to kill her and had, as a consequence of this reason, passed out drunk on the night in question. One of the few people to actually believe he is innocent is Ig's best friend, and public defender, Lee (Max Minghella, The Internship, The Social Network).

Credit: http://en.wikipedia.org/wiki/Horns_%28film%29#mediaviewer/File:Horns_Official_Movie_Poster.jpgFrustrated by the hatred the who town feels towards him, and still devastated about the loss of his girlfriend - even if he worries that he might be responsible for her death himself - Ig rails at God at the site of her murder. The next day, which might be connected, he finds horns growing from his forehead. It seems the town has been considering him to be a devil so much that he is taking the form of one. People are able to see them, yet they react surprisingly mildly too them. No outbreaks of fear or disbelief; instead they just seem to accept them. Except, Ig notices that people start acting differently. They start saying things that they would normally not have voiced, showing their inner feelings - which are often not very nice. Often, they start acting on these thoughts too.Ig decides that this ability will help him discover who actually killed Merrin. As well as people voicing truths they would normally have kept quiet, people become more suggestible around him and he is also able to influence them into giving him information, if they know it, and making them act on their thoughts, rather than them just deciding to do it from Ig's presence. After the event, it seems people do not remember what happened. Then Ig finds he is able to start attracting snakes too.This is a supernatural horror film that can keep you guessing. As Ig isn't totally certain of his own innocence - having no memories from the time of the murder - you, too, have doubts. Is Ig's increasingly demonic nature a manifestation of the town's beliefs, or instead his own inner nature coming out? Daniel Radcliffe does an excellent performance as the conflicted Ig. There are excerpts from Ig's younger years, including when he met Merrin, and the group of friends he had, as well as clips from close to the time of the murder, as Ig seems to have also acquired the ability to sometimes read people's memories. There are some definite unpleasant scenes, and all too many people reveal a hidden dark side in Ig's presence, yet there are also, surprisingly, some funny scenes too, as people act out on Ig's suggestions. Horns is a good story that can keep you guessing as to the final details until the end. 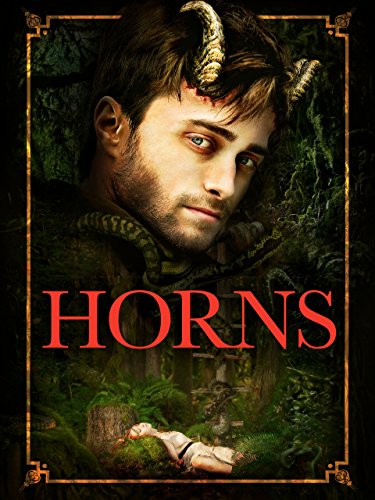