Get Hotel Transylvania 2 cheaply from Amazon. You too can earn money from writing articles by signing up for InfoBarrel.
InfoBarrel is a writing platform for non-fiction, reference-based, informative content. Opinions expressed by InfoBarrel writers are their own.
InfoBarrel > Entertainment > Film > Movies

Certificate U, 89 minutesDirector: Genndy TartakovskyStars: Adam Sandler, Andy Samberg, Selena GomezHotel Transylvania 2 is the sequel to the original film and opens with the wedding of the vampire daughter of Dracula (Adam Sandler, Pixels), Mavis (Selena Gomez), and the human Jonathan (Andy Samberg) at the titular hotel. One year on, and Mavis becomes pregnant, giving birth to a son, Dennis (Asher Blinkoff).The next (nearly) five years pass quite quickly. Drac is a bit concerned because Dennis hasn't shown any sign of becoming a vampire as yet - he's proving to be what the vampires call a "late fanger" - or, at least, that's what Drac hopes is the case, as Dennis, in fact, seems totally human. He's not evincing any vampiric abilities, and his hair does not really look like a vampires, being red and curly. If Dennis doesn't grow fangs before his fifth birthday, he never will, and that will mean that he is a human. Despite what Drac says to Mavis, and despite the fact that he really dotes on his grandson, he also wants him to be a vampire.

Credit: https://en.wikipedia.org/wiki/File:Hotel_Transylvania_2_poster.jpgThere's another reason for wanting him to be a vampire. Mavis is getting concerned about Dennis's safety around all the monsters as he isn't a monster himself. She's considering moving to Johnny's home town of Santa Cruz in California, and Johnny is going along with this. Drac doesn't want his daughter and grandson to leave, so he plots with Johnny to try and prevent this.Johnny and Mavis are going to go to Santa Cruz to take a look at the town and visit Johnny's parents, spending a week there. Whilst they are away, Drac is going to look after Dennis, and plans to try and get Dennis to finally show signs of being a vampire. In order to do this, he, Dennis, the werewolf Wayne (Steve Buscemi, Monsters University, The Incredible Burt Wonderstone), the mummy Murray (Keegan-Michael Key, The Angry Birds Movie), Frank, or Frankenstein's Monster (Kevin James), the invisible man Griffin (David Spade) and Blobby, the animated, pretty much speechless, blob of transparent green goo.Things have changed since Dracula was a child. All the gang is older and doesn't really remember how to be scary any longer, especially as humans aren't scared of them either. The vampire summer camp Drac visited as a child is now run by a director who is extremely conscious of lawsuits, and so all the activities are rather less challenging - and therefore less dangerous - than they were when he visited as a young vampire. Meanwhile, in Santa Cruz, Mavis is quite enjoying the town, as it features lots of things she never saw when growing up.This is a computer animated film and it's available in both 2D and 3D, with the 2D version being the one watched. 3D does tend to work best with computer animation, though, so it would probably be one of the better films to watch in 3D. There are a variety of visual gags, such as Drac attempting, with some difficulty, to use a smartphone touchscreen with long fingernails, and ones you have to watch out for, as they are part of the scenery (such as Dennis's birthday) so it's a good idea to pay attention to the film. The plot is nothing to really speak about, although there is a message of tolerance and love, no matter who, or what, a person is, and the animation is of the quality you would expect in today's films. Most of the gags are pretty surface level, and only a handful of them really seem to be related to the cinematic archetypes of the monsters in question, which is a shame (there are some, though), although it is funny to watch a group of monsters who are really past being monsters.Although it is the lowest certification of film, very young children might find it a bit scary, but that will depend on the child in question. It is overall quite family friendly. Hotel Transylvania 2 is enjoyable enough, but it's best not to think too deeply about it, as it starts to fall to pieces if you do, so this is a film where you are best just parking your brain and enjoying the activity on the screen. 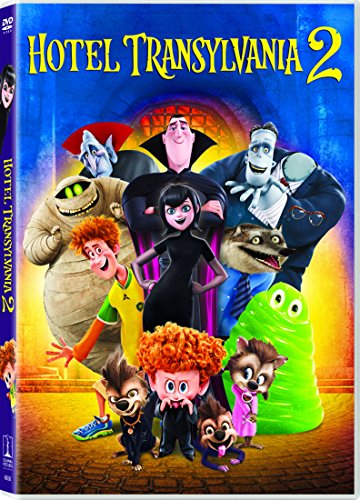