Buy I, Frankenstein cheaply from Amazon or read more articles on film and television. You too can earn money from writing articles by signing up for InfoBarrel.
InfoBarrel is a writing platform for non-fiction, reference-based, informative content. Opinions expressed by InfoBarrel writers are their own.
InfoBarrel > Entertainment > Film > Movies

Certificate 12A, 92 minutesDirector: Stuart BeattieStars: Aaron Eckhart, Bill Nighy, Miranda OttoI, Frankenstein is based on the graphic novel by Kevin Grevioux, itself based on Mary Shelley's classic book Frankenstein. In 1795 Victor Frankenstein (Aden Young) creates a living corpse, the Monster (Aaron Eckhart, London Has Fallen, Olympus Has Fallen), assembled from the parts of several bodies. The film starts in 1795 by recapping the story and the Monster is burying his creator when he is attacked by demons. He is saved by living gargoyles of the Gargoyle Order, an order created by the Archangel Michael to defend the human race, beings who can transform between gargoyle and human form.

Credit: http://en.wikipedia.org/wiki/File:I_Frankenstein_Poster.jpgThe Order occupies a cathedral in an unnamed city and the Monster is taken before the Order's queen, Lenore (Miranda Otto), who names him Adam. Adam was actually the name of Frankenstein's monster in the book, as Frankenstein was his creator's name. The film got that right and, indeed, it looks like the brief story of Adam's creation and actions are actually accurate, although they may not appear to be to many because that's not how the story is normally told. Lenore spares the newly named Adam, although her lieutenant Gideon (Jai Courtney, A Good Day to Die Hard, Divergent, Insurgent) is of a different opinion and believes that the Monster should be destroyed.Two hundred years later and Adam is still being pursued by demons. Dr. Terra Wade (Yvonne Strahovski, Killer Elite) is working on the re-animation of the dead for her funder, Charles Wessex - actually the demon Prince Niberius (Bill Nighy, About Time, Jack the Giant Slayer, The World's End). Dr. Wade's motives seem to be the intention to help people, whilst Niberius wants Frankenstein's secrets so he can create an army of creatures like Adam; creatures who are stronger, tougher and harder to kill than normal humans. Niberius has therefore been collecting human corpses for many years for when the process is perfected and storing them in a ridiculously huge steampunk style facility beneath the laboratory building.I, Frankenstein is available in both 2D and 3D, with the 3D version being the one seen. The film seems to be concentrating on effects over plot, which can actually work, but in this case too little time is spent on the effects and action. The 3D is most noticeable during those scenes full of CGI effects but, as mentioned, there are not enough of them. The demons quite frankly look rather cheesy when they reveal their true faces, looking more like a cartoon of a demon than anything genuinely demonic. This could have been a visually stunning and action filled film, but it isn't. It could also have been a rather more thoughtful film on what makes a human being. What it actually is is a rather bland blend of both that is actually neither. It looks like a sequel may have been intended, but it seems unlikely that this will happen. I, Frankenstein is, rather like Frankenstein's creation, a bit soulless. 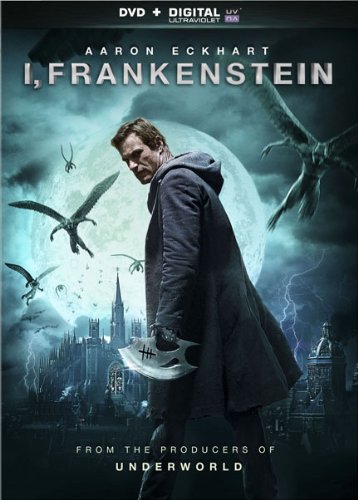