Get In Time cheaply from Amazon, or read more articles on film and television. You too can earn money from writing articles by signing up for InfoBarrel.
InfoBarrel is a writing platform for non-fiction, reference-based, informative content. Opinions expressed by InfoBarrel writers are their own.
InfoBarrel > Entertainment > Film > Movies

12A certificate, 109 minutesDirector: Andrew NiccolStars: Justin Timberlake, Amanda Seyfried and Cillian Murphy"For a few to be immortal, many must die"In Time is set in 2161, technology has managed to stop people from aging. Once a person reaches 25, they stop aging. Death is still possible, through accident, murder or, the most common, timing out. Everyone has a clock on their arm, showing how much time they have left. People are born owning just one year, although the children of the wealth will be gifted more by their parents. Once they reach 25, that clock starts counting down in real time, and for the poor majority, much of that time is used pretty quickly to pay family debts.To stay alive, more time must be earned. In this somewhat dystopian future, time really is money. Everything costs time, every job pays time. Although it is still possible to store money in banks, most do not have enough to keep it anywhere but on their arm. Time can be borrowed, but at high interest rates. Everything - food, transport, lodging, everything - costs time to buy, and the prices are always going upwards. Time can also be stolen, and once your clock reaches zero, you die.

Credit: http://en.wikipedia.org/wiki/File:Intimefairuse.jpgWill Salas (Justin Timberlake, The Social Network, Bad Teacher, Runner, Runner) is a factory worker who lives alone with his mother, Rachel (Olivia Wilde, Rush, The Incredible Burt Wonderstone, TRON: Legacy) in Dayton, his father having been killed some years previous, when he meets Henry Hamilton (Matt Bomer), a rich 105 year old with over a century on his arm. Local gangster, Fortis (Alex Pettyfer), head of the Minutemen, wants Hamilton's time, but Will helps him escape. Hamilton explains the true nature of the society, that the majority are kept deliberately poor so that the few can enjoy immortality. Hamilton came to Dayton because he was tired of living, and, whilst Will sleeps, gives him most of the time he has left, leaving himself just five minutes.Will Salas, with the century he now has, heads to New Greenwich, where the rich live, and after a game of cards with Philippe Weis (Vincent Kartheiser), parlays that into more money. Weis invites Will back to his house, where he meets Weis's daughter, Sylvia (Amanda Seyfried, A Million Ways to Die in the West, Pan).In the meantime, the Timekeepers - the future equivalent of the police, who keep track of time itself - under the lead of Timekeeper Raymond Leon (Cillian Murphy, Red Lights) are looking into Hamilton's death and have been following Will through his expenditures of time. They catch up with him at Weis's house and arrest him, but Salas escapes, taking Sylvia hostage, and goes on the run.Will and Sylvia spend much of the film being pursued by both Leon and the gangster Fortis who bears a grudge for Will taking Hamilton, and his time, from him. Will decides he wants to bring the system down, and the pair start stealing time and giving it away.There is a fair bit of violence in the film but, given that stealing someone’s time is more profitable than killing them outright, most of the violence is bloodless. As an interesting side effect of the society portrayed, there are no actors in the film who look old. Some are definitely older than the 25 years old they are supposed to be, but no-one appears middle aged, because aging stops completely at 25. In Time is a perfectly decent science fiction thriller, if nothing spectacular. 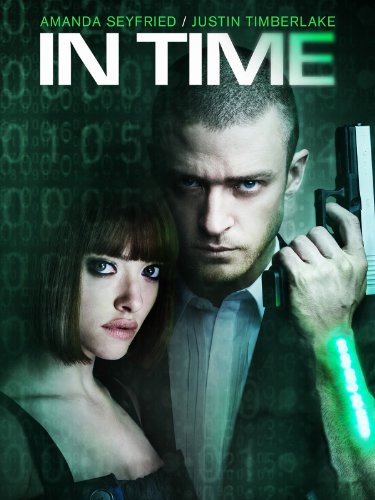