Buy Inside Out cheaply from Amazon. You too can earn money from writing articles by signing up for InfoBarrel.
InfoBarrel is a writing platform for non-fiction, reference-based, informative content. Opinions expressed by InfoBarrel writers are their own.
InfoBarrel > Entertainment > Film > Movies

Movie Review: Inside Out

Certificate U, 94 minutesDirectors: Pete Docter, Ronaldo Del CarmenStars: Amy Poehler, Bill Hader, Lewis BlackInside Out is a computer animated film about the voices that live in our heads and direct our actions. It starts with Riley (Kaitlyn Dias) being born, which results in the first voice appearing, Joy (Amy Poehler). Joy is responsible for, as her name suggests, joy, but she is also quickly joined by Sadness (Phyllis Smith). As Riley gets older, three more voices appear, Fear (Bill Hader), Anger (Lewis Black) and Disgust (Mindy Kaling).

Credit: https://en.wikipedia.org/wiki/File:Inside_Out_%282015_film%29_poster.jpgThe voices live in headquarters - there are more areas - where they control Riley's actions, Joy largely being in charge of things. They organise memories and display them as needed, sending others into storage, the memories being large spheres of different colours, representing the different emotions. Some memories are more important than others; these are the core memories which are responsible for Riley's personality. The film starts by quickly showing how the voices work, and how Riley's life is, before things change.Riley is now eleven and, together with her Mom (Diane Lane, Man of Steel) and Dad (Kyle MacLachlan) she is moving to San Francisco from Minnesota. Things don't get off to a great start; the moving van has gone to Texas with all their things in it, leaving the house unfurnished, San Francisco has ruined pizza by putting broccoli on it, the first day of school goes really badly and Riley is missing her friends and home. Sadness, who Joy has never really figured out, starts touching memories and making them into sad ones. In an attempt to protect the core memories from Sadness, they wound up being spilled, and the memories, Joy and Sadness are sucked into long term storage.Without access to the core memories, Riley starts losing parts of her personality, and Fear, Anger and Disgust make a mess of running things without Joy. Joy and sadness want to get back to headquarters, but it's a long, difficult way away. The main voices aren't the only beings living inside Riley's head; there are lots of maintenance personnel and those responsible for running things like imagination and dreams. They find help in the form of Bing Bong (Richard Kind), but getting back is a difficult process and, whilst they are trying, Riley starts to fall apart emotionally - which means the areas inside her head start to fall to pieces too. As Joy and Sadness struggle to get themselves and the core memories back, the others start making poor decisions on how to go about fixing the situation, which could have potentially devastating effects. The plan Anger comes up with is logical, but not really a good idea.The film is available in 2D and 3D, with the 2D version being the one watched although, as it's entirely computer animated, 3D would likely have worked. It was preceded by a short, animated film called Lava. As with all the best films of this type, there are multiple levels to the story, making it attractive for all ages, and not just something suitable for children. There is the beautiful animation itself, which is exquisitely detailed and often very colourful, but the film is far deeper than that. The different emotions are interesting personalities - or possibly personality fragments, as they embody a primary emotion - in themselves, with Joy in particular maturing through the film, but there is still more to the film. Most of the film is about Riley's voices; there are a couple of brief clips of those belonging to Mom and Dad, and also those for a number of other people - and animals - in the end credits, which are worth watching, especially for the cat and the bus driver.There are really multiple threads to the story. The first one is the move to San Francisco, and the effect it has on a child, which is viewed from an entirely new perspective, that of the voices in your head, and how it can have a deleterious effect on a person. There is the quest by Joy and Sadness to get back to headquarters, facing multiple perils and obstacles as Riley starts to fall to pieces. And then there is the relationship between Joy and Sadness, as the former discovers just what use the latter is. This all comes together into what is quite a complex story, but it isn't necessary to fully comprehend the story in order to enjoy the film, which is why both children and adults can take something from it. Older audiences especially are quite likely to find elements of the film moving, although younger ones may miss strands of the plot, but they should still find it enjoyable to watch. Inside Out is an excellent animated film that can appeal to all ages - and a film that does kind of explain just why people behave the way they do. 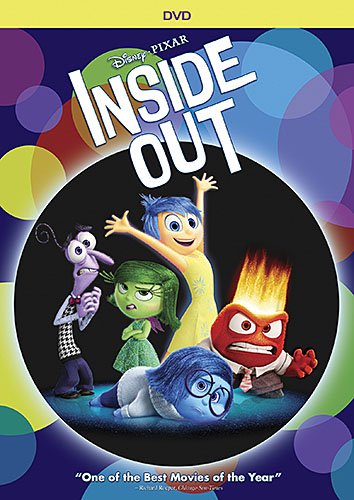