Buy Divergent, or the Veronica Roth novel of the same name, cheaply from Amazon. You too can earn money from writing articles by signing up for InfoBarrel.
InfoBarrel is a writing platform for non-fiction, reference-based, informative content. Opinions expressed by InfoBarrel writers are their own.
InfoBarrel > Entertainment > Film > Movies

Certificate 12A, 119 minutesDirector: Robert SchwentkeStars: Shailene Woodley, Ansel Elgort, Theo JamesInsurgent, also known as The Divergent Series: Insurgent, is based on the book of the same name by Veronica Roth and is the sequel to Divergent, and the second story in the Divergent trilogy. The film starts only a few days after the events of Divergent. Jeanine (Kate Winslet, Contagion, Triple 9), the head of the Erudite faction, has blamed the attack on the Abnegation faction on Divergents controlling some of the Dauntless faction, and used this as a pretext to get the rest of the council to agree to martial law. The Dauntless who are backing her, led by the unpleasant Eric (Jai Courtney, A Good Day to Die Hard, I, Frankenstein), are, at the beginning of the film, ransacking the tiny Abnegation area, looking for something in particular. This is a pentagonal box, an electronic device, which is marked with the symbols of all five factions.

Credit: http://en.wikipedia.org/wiki/The_Divergent_Series:_Insurgent#/media/File:Insurgent_poster.jpgTris (Shailene Woodley), Tris's brother, Caleb (Ansel Elgort), her boyfriend Four (Theo James) and fellow Dauntless Peter (Miles Teller, Fantastic Four) are hiding out in a farming community operated by the Amity faction, which is inside the walls of Chicago. In the first film it looked like the farmers were outside the walled-off area of Chicago, which made very little sense; in this one they are definitely not.Jeanine is rounding up Divergents, because they are the only ones who can open the box she has found. Everything she is doing is for "the greater good." Of course, like so many people who do things for the "greater good" she has a definition of that that is rather at odds with the sentiment. The greater good, as defined by her, and which sacrifices must be made, as long as said sacrifices aren't made by her. A typical hypocritical exponent of the theory of the greater good in other words.Tris and Four decide that they have no choice but to fight against Jeanine. With the surviving Dauntless, they still have insufficient numbers, but the leader of the Factionless, Evelyn (Naomi Watts), wants their forces to combine and move against Jeanine and Erudite.Insurgent is available in both 2D and 3D, and the 3D version was the one watched. The 3D didn't add much to the film being, as is often the case with live action films short on special effects, largely unnoticeable, with the only real exceptions being in a couple of sim scenes. These were also the scenes with the greatest use of special effects, and which departed the greatest from reality, by their very nature.Insurgent, like Divergent, is rather lacking in many areas. It is, though, slightly less young adult and more mature than the first in the series, which should make it slightly more appealing to older viewers. The film looks better than its predecessor, probably due to the higher budget, but still large amounts of the plot do not make a lot of sense, in particular the Faction system. Some of this is a holdover from the first film, though, and it would be difficult to alter that so that it did make sense without rewriting the script of the first. There are new parts of the plot that also make no sense, either, which are revealed towards the end of the film. The major reveal connected to the pentagonal box isn't as big a reveal as it could be. Some parts are slightly surprising, and do make elements of the plot make sense, but other parts can be quite easily guessed, and those elements of the plot that do now make more sense result in new, nonsensical plot elements. Hopefully, these may be sorted out by the third film in the trilogy, but this is not guaranteed.That does, of course, at least partly depend on whether or not the trilogy is actually a trilogy. There's always a possibility that the final book may split into two films, as has most recently been done with The Hunger Games: Mockingjay, but has also been done with Harry Potter and the Deathly Hallows and The Twilight Saga: Breaking Dawn.Insurgent is not the best dystopian young adult fiction around, and there is an awful lot of that to compete with, some of it extremely dystopian (The 100 springs to mind for that). The primary cast are doing their best, but they sometimes don't have much to work with. Tris, especially, seems to struggle with her role - she certainly isn't the rather more forceful female lead as seen in The Hunger Games's Katniss Everdeen. Much of the time she seems to be rather passively going along with events. In some ways, Insurgent is better than Divergent, but still not the best - whether or not the series will come to a good conclusion is still open to question, but it does seem probable that the film will be successful enough to result in the series being continued. 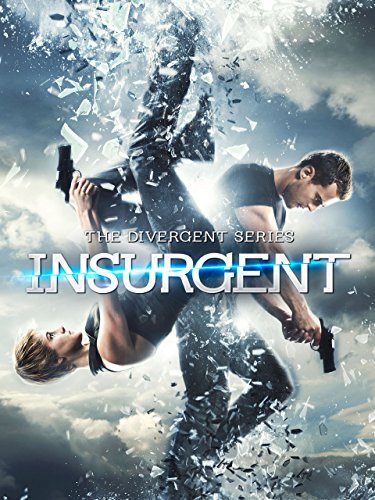 The Divergent Series: Insurgent (Plus Bonus Features) Amazon Price: $9.99 Buy Now(price as of Dec 9, 2016)
Next >> Movie Review: The Girl on the Train