Get Into the Storm or Twister cheaply from Amazon. You too can earn money from writing articles by signing up for InfoBarrel.
InfoBarrel is a writing platform for non-fiction, reference-based, informative content. Opinions expressed by InfoBarrel writers are their own.
InfoBarrel > Entertainment > Film > Movies

Movie Review: Into the Storm

Certificate 12A, 89 minutesDirector: Steven QualeStars: Richard Armitage, Sarah Wayne Callies, Matt WalshInto the Storm starts off in Oklahoma with a car full of teenagers who see something coming at them at night down the street. Stupidly, and probably quite realistically today, one of them decides to film the oncoming tornado with his phone camera instead of doing the sensible thing and getting out of there.Pete (Matt Walsh) and his team, including meteorologist Allison (Sarah Wayne Callies) and three cameramen/drivers are professional storm chasers who are down on their luck. They haven't managed to film a tornado in over a year and really need to get some footage soon, as their funding has just been pulled, which means that Pete won't be able to support their two vehicles; a van full of weather equipment and Titus, an armour plated reinforced behemoth designed to go into tornadoes themselves. Allison thinks there is going to be a tornado in the nearby town of Silverton, Oklahoma. This group accounts for one of the main storylines of the film.The other revolves around Donnie (Max Deacon). Donnie is shooting interviews of people for a time capsule he is doing on the instigation of his father, Gary (Richard Armitage, The Hobbit: An Unexpected Journey, The Hobbit: The Battle of the Five Armies, The Hobbit: The Desolation of Smaug), who also happens to be the vice-principal of his school. Instead of shooting the graduation ceremony as he is supposed to be doing, at the instigation of his brother Trey (Nathan Kress) he instead ends up helping Kaitlyn (Alycia Debnam Carey), a girl he has fancied from afar for some time, with a video she needs shooting at an abandoned paper mill. This is the second story of the film. A short, third, is provided by two unemployed idiots who seem to be along for comic relief.

Credit: http://en.wikipedia.org/wiki/Into_the_Storm_%282014_film%29#mediaviewer/File:Into_the_Storm_2014_film.jpgWhen the storm hits, there are multiple tornadoes hitting the town. Allison says that two storm fronts have collided and nothing like this has ever been seen before. Donnie and Kaitlyn end up trapped at the paper mill, and Donnie's father tries to find them, encountering the storm chasers along the way. Lots of strong winds, some rather bloodless fatalities, and buildings being ripped to shreds as twisters hit all over town, destroying everything they touch. Pete has finally got his footage.Most of the film is seen through hand held, vehicle mounted (land and helicopter), CCTV and phone cameras, presumably to contribute to the feel of the film, even if it seems unlikely that some of the footage shot would have actually been recovered after what happened to the cameras shooting it. Towards the end, though, there are several scenes where none of these methods were used. It seems that they wanted certain shots that couldn't have been obtained using the methods that were supposedly being used, and so resorted to traditional filmmaking, which is jarring and doesn't make sense. Why, after the shots have all been done one way, would you suddenly have footage in the air of planes being thrown around by the tornado? Unless, of course, you simply wanted to have that shot in no matter what.This isn't the greatest film around. The tornadoes are pretty impressive, especially the firenado, but, although people are definitely getting injured and killed, little true peril comes across from the way these situations are handled. The characters are pretty stereotypical, too. The family with problems who are pulled back together by the storm, the overly focussed storm chaser who shows that he is still human and the single mother worried for her daughter. They don't really add anything. Some of the situations are stereotyped as well. At one point, one character says something and you just know that something bad is going to happen to the person he was speaking to. Into the Storm is basically Twister for the 21st century - bigger storms, smaller characters. 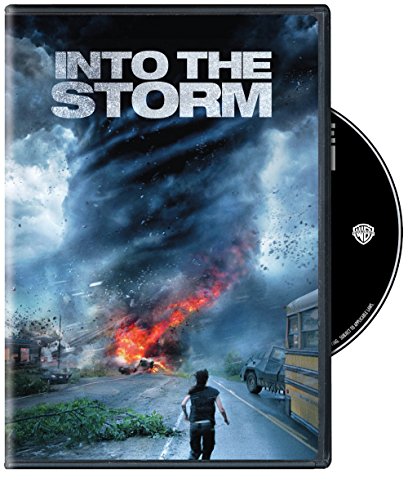