Buy Iron Sky cheaply from Amazon, or read more articles on film and television. You too can earn money from writing articles by signing up for InfoBarrel.
InfoBarrel is a writing platform for non-fiction, reference-based, informative content. Opinions expressed by InfoBarrel writers are their own.
InfoBarrel > Entertainment > Film > Movies

Director: Timo VuorensolaStars: Julia Dietze, Christopher Kirby and Götz OttoIron Sky is set in 2018. At the end of World War II Nazi Germans fleeing the defeat of the Third Reich set up a secret base on the dark side of the Moon (the dark side is that side which cannot see or be seen from the Earth; it isn't actually dark). The United States has launched a new mission to the Moon as part of the election campaign of the unnamed President of the United States - who seems rather similar to Sarah Palin - played by Stephanie Paul. One of the astronauts on that mission is James Washington (Christopher Kirby) a black male model whose primary qualification for being chosen is being black.A Nazi Moon Base is not a new idea; the idea of Nazi space programs and flying saucers during World War II has been popular for years, both in fiction and (supposed) factual accounts.

Credit: http://en.wikipedia.org/wiki/File:Iron_sky_poster.pngAfter Washington is captured by the Nazis, he is brought back to Earth by a team led by would-be Führer Klaus Adler (Götz Otto) and Adler's girlfriend Renate Richter (Julia Dietze). The objective is to infiltrate Earth society and set up the planned invasion - which appears to require teaming up with Vivian Wagner (Peta Sergeant) who is running the President's re-election campaign.The action, spaceships and Nazi Moon Base depicted in the film are pretty good. In particular, it's interesting to see a moon base constructed using 1940s technology. Although it is kind of odd that the technology hasn't really developed since other than getting bigger. Lots of explosions and fights between the futuristic Earth-tech and the Nazi flying saucers and space going Zeppelins.What Iron Sky suffers from is a lack of focus as to what type of film it wants to be. Is it meant to be a humorous film? There's definitely some comic parts, but it often seems forced into the rest of the story.Is it having a go at the political party in power in the US in the film? Although not actually named as Republicans, this party does seem to have certain things in common with some of the more extreme members of the Republicans. In particular, is it making a political statement about the fact that this party is willing to base their campaign speeches on Nazi propaganda, suggesting that Nazi ideology is not in the past, and is disguised among modern political entities.Is it some type of steampunk film? Nazi space technology in Iron Sky seems to have evolved very little in most respects since the Second World War; cogs, wheels and levers are in use while electronics aren’t. Is it a science fiction film, as the rest of the world's space technology seems rather futuristic, especially when compared to the Nazi fleet.Oddly, many of the Moon Nazis have a distorted view of their history and consider themselves to be peaceful - not an altogether unusual delusion - yet maintain this while living in a regimented culture that is mass producing weapons and planning an invasion of Earth. Poor plotting? Or is this another political statement?If Iron Sky had narrowed its' focus a bit, instead of trying to be too many different things, it would probably have been a better film. 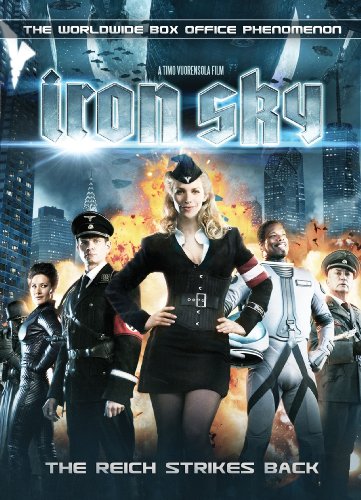