Buy Jack Ryan: Shadow Recruit cheaply from Amazon or read more articles on film and television. You too can earn money from writing articles by signing up for InfoBarrel.
InfoBarrel is a writing platform for non-fiction, reference-based, informative content. Opinions expressed by InfoBarrel writers are their own.
InfoBarrel > Entertainment > Film > Movies

Certificate 12A, 105 minutesDirector: Kenneth BranaghStars: Chris Pine, Kevin Costner, Keira KnightleyAt the start of Jack Ryan: Shadow Recruit the titular Jack Ryan (Chris Pine, Star Trek Into Darkness, This Means War) is studying at the London School of Economics - in London naturally - when he catches an event on the news. The date is September 11th, 2001, the day of the attack on the World Trade Centre in New York. Ryan enlists in the U.S. Marines and, eighteen months later, is flying over Afghanistan in a helicopter when it is shot down. He suffers a serious spinal injury and ends up doing physical therapy at the Walter Reed Medical Centre where he meets Cathy Muller (Keira Knightley, Seeking a Friend for the End of the World, The Imitation Game), his physical therapist.Given that Jack is now effectively out of the war, U.S. Navy Commander Thomas Harper (Kevin Costner, 3 Days to Kill, Man of Steel) wants him to continue down a different path, by joining the CIA, using his skills as an economist to help stop terrorist events before they happen. He completes his doctorate and goes to work on Wall Street, as well as working for the CIA as an analyst. Another ten years pass, and Ryan discovers what looks like a Russian plot to destroy the economy of the United States, which results in him being sent to Moscow. Said plot is being run by Russian businessman Viktor Cherevin (Kenneth Branagh), whose firm is partnered with Ryan's. Russia's antipathy with the West did not start with the Cold War and did not end with it either.

Credit: http://en.wikipedia.org/wiki/File:Jack_Ryan_Shadow_Recruit_poster.jpgThe film is not, as might have been expected by those familiar with the books by the late Tom Clancy, about Jack Ryan, Jr., the son of Jack Ryan. Instead, it's about the same one who appeared (albeit played by three different actors) in The Hunt for Red October, Patriot Games, Clear and Present Danger and The Sum of All Fears. This is in fact a reboot of the film franchise. The previous four films were all based on novels by Tom Clancy; this one is not.As a consequence, this Ryan, Sr. has a rather different backstory to the one from the novels. Whilst some elements remain the same, such as Ryan joining the Marines, being in a helicopter crash as a Marine lieutenant and working on Wall Street, how and why those events happened is completely different, as is how he met Cathy.Jack Ryan: Shadow Recruit is described as an action thriller, and there is a fair bit of action in the trailer, but the action in the film - excluding the helicopter crash in the first few minutes - takes quite a while to kick off and, when it does, is oddly bloodless. For instance, Ryan is involved in a fight that causes substantial damage to a hotel room, yet he walks away literally without a scratch. The film itself also feels somewhat bloodless, as if something has been lost.It might have worked better if they hadn't rewritten the character so much and instead worked with that of Jack Ryan, Jr. who seems to be much more action oriented than his father ever was. Ryan was a product of the Cold War, and worked almost solely as an analyst, rarely getting involved in violence. Jack Ryan, Jr. is a product of the War on Terror, and gets into conflicts much more frequently.It's okay, but it seems like a needless reboot of the existing character when there was another one to work with who would probably have worked better for the role. Those familiar with the character may well not appreciate having the character rewritten to the extent to which he has been; those who aren't familiar will probably neither know or care who Jack Ryan is. Jack Ryan: Shadow Recruit isn't bad, and works okay as a thriller with a decently put together story, with one funny bit where Cathy reacts to what Ryan's job is, but it could have been better. 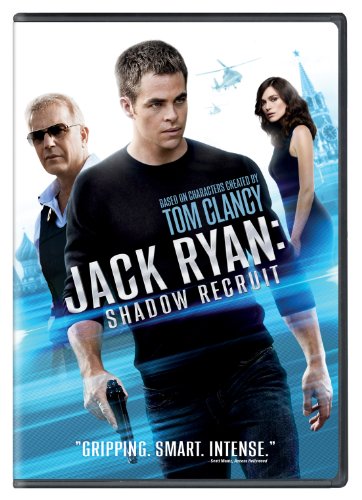