Read Edgar Rice Burroughs' Barsoom series. Get John Carter cheaply from Amazon. You too can earn money from writing articles by signing up for InfoBarrel.
InfoBarrel is a writing platform for non-fiction, reference-based, informative content. Opinions expressed by InfoBarrel writers are their own.
InfoBarrel > Entertainment > Film > Movies

12A Certificate, 132 minutesDirector: Andrew StantonStars: Taylor Kitsch, Lynn Collins and Willem DafoeJohn Carter is based on the Barsoom novels of Edgar Rice Burroughs (whose probably most well known creation is Tarzan) in particular the novel A Princess of Mars, although elements such as the Therns were not discovered in the books until The Gods of Mars.The film is available in both 2D and 3D. The 2D version was the one watched, as I don't feel that 3D adds much to most films beyond the chance to get a nasty headache.Barsoom, known to us as Mars, is a dying world if not yet the dead planet we know. Two city states, Helium and Zodanga, are engaged in conflict when the ruler, or Jeddak,  of Zodanga, Sab Than (Dominic West), is given a powerful weapon by the Thern Matai Shang (Mark Strong). Zodanga is destroying much of the remaining resources of Barsoom. The red-skinned humans of Barsoom wear rather more clothing in the film than they did in the books, as in the books they mostly wore jewellery and  weapons.

Credit: http://en.wikipedia.org/wiki/File:John_carter_poster.jpgBarsoom as a planet is a mix of high and low tech; soldiers wear metal armour and wield swords, but also have some kind of energy projectile weapon; airships fly through the air yet their control mechanisms are cogs and pulleys.In New York in 1881, Edgar Rice Burroughs (Daryl Sabara) receives a telegram from his rich uncle, John Carter (Taylor Kitsch, Battleship), asking him to come at once. There, he discovers he is the beneficiary of his uncle's estate and is given his uncle’s diary, which only he is to read. This same device was often used by Burroughs in real life, presenting his stories as factual accounts given to him.The diary details how, 13 years prior to the New York encounter, after the American Civil War, embittered and disillusioned former Confederate cavalry captain John Carter was prospecting in Arizona, looking for gold. After an encounter between Apaches and the US Seventh Cavalry, Carter seeks shelter in a cave full of gold ore. There, he is attacked by a Thern and gets transported to Barsoom.On Barsoom, he encounters the Tharks, a race of four armed, tusked, green skinned  warriors, and their Jeddak, Tars Tarkas (Willem Dafoe, A Most Wanted Man, John Wick). Carter's Earthly heritage means that he has superior strength and physical abilities in Barsoom's lower gravity. These abilities help him to gain acceptance with the Tharks. Tars Tarkas takes a liking to him, as does the female Sola (Samantha Morton), who enables him to understand the Barsoomian languages.Whilst with the Tharks, he encounters a fleeing Dejah Thoris (Lynn Collins, X-Men Origins: Wolverine), the princess of the city state of Helium, and her pursuer, Seb Than. Dejah Thoris seeks Carter's help against Seb Than and Zodanga. Still embittered from events in the Civil War, Carter has no interest in helping, merely wanting to return to Earth and his cave of gold.The rest of John Carter tells the story of the conflict between the two city states and the aims of the Therns. There are no great surprises in the story as much of it is resolved in exactly the way that would be expected of any story with a beautiful princess, a hero and an evil tyrant. The film is really pretty short on story and concentrates more on action. Enjoyable silliness really. 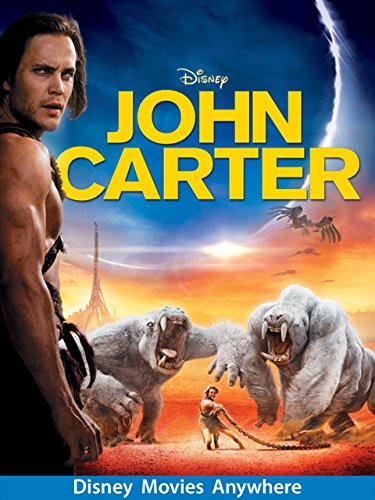