Get Jurassic World or the other Jurassic Park films cheaply from Amazon. You too can earn money from writing articles by signing up for InfoBarrel.
InfoBarrel is a writing platform for non-fiction, reference-based, informative content. Opinions expressed by InfoBarrel writers are their own.
InfoBarrel > Entertainment > Film > Movies

Certificate 12A, 124 minutesDirector: Colin TrevorrowStars: Chris Pratt, Bryce Dallas Howard, Ty SimpkinsJurassic World is the fourth film in the Jurassic Park series, and it is set in the same world as the previous three, rather than being a reboot - which was definitely possible, given that is well over a decade since Jurassic Park III was released - there's a statue of John Hammond (who was played in the earlier films by the late Sir Richard Attenborough) in one of the buildings, a research wing named after him and Dr. Henry Wu (B. D. Wong) from the first film makes a reappearance. Jurassic World is also set on the same island as the original.The film opens with two dinosaur eggs hatching, one of which is hatching faster than the other, with a claw poking out. The claw which pokes through the shell does not look entirely right; it appears rather like an elongated hand in terms of its flexibility, albeit one without enough fingers.

Credit: https://en.wikipedia.org/wiki/Jurassic_World#/media/File:Jurassic_World_poster.jpgZach (Nick Robinson, The 5th Wave) and Gray (Ty Simpkins) are two brothers who are going off to visit the Jurassic World theme park - a theme park built around dinosaurs, including a dinosaur petting zoo and water show - as their aunt, Claire (Bryce Dallas Howard) - who they haven't seen for many years - runs the park on a day-to-day basis. Aunt Claire is a rather tightly wound, over organised and buttoned up workaholic who is pursuing a corporate sponsorship of the latest attraction when they arrive, so she leaves them in the care of her assistant, Zara (Katie McGrath).The attraction that was being considered for corporate sponsorship is the Indominus rex, which was what was hatching from the eggs at the beginning. There were originally two, but the female ate her brother. This is not a dinosaur but an entirely new creation. In order to keep people's interest up and keep them coming to the park - dinosaurs are rather old hat over a couple of decades - there is a constant need to create new attractions. In this case, something bigger and more dangerous than a Tyrannosaurus rex. The Indominus is a gene spliced creation built on a T. rex base, but other creatures' DNA has also been spliced into it, making it a hybrid - although what the other creature are is classified. The idea is that a dinosaur that is terrifying will also prove to be very popular.The Indominus attraction is going live in a few weeks, but before it does, the park's owner, Simon Masrani (Irrfan Khan), wants the enclosure it is in to be checked over by a former Navy man, Owen Grady (Chris Pratt, Guardians of the Galaxy, The Lego Movie), who is now working at the park. Owen is training a group of Velociraptors - quite why isn't certain, as he is opposed to the idea of training them for military use, as suggested by Hoskins (Vincent D'Onofrio, Escape Plan, Run All Night), possibly his boss - to obey commands, and is having reasonable success. Truthfully, this plot line is the one that makes the least sense, and it seems to only be there so that the Velociraptors can make an appearance. He also has a bit of history with Claire.The Indominus rex is rather more intelligent than thought; it is actually reasonably intelligent and not merely intelligent for a dinosaur. It also has some unusual abilities from some of the species whose DNA has been used to create the hybrid. The Indominus escapes from confinement, only not in the way they had initially thought and kills most of an Asset Containment Unit (assets are the dinosaurs) that had been sent after it. The resulting killer rampage causes other assets to get free, causing more destruction and death, and Claire's nephews have gone missing, so she and Owen try to find them. Claire quickly looses here perfectly coiffed appearance as she and Owen travel through jungle and mud looking for her nephews, and she discovers feelings for them beyond the pro forma along the way.The Indominus may be the biggest threat, but it's hardly the only one in a park full of carnivorous reptiles most of which are bigger than a human. What makes the Indominus so dangerous is its intelligence; it is literally outwitting its human pursuers, who continually underestimate it. Not everyone human is acting in that beneficial way either.The dinosaurs are certainly spectacular - they look very realistic, especially in the scenes where the Velociraptors are running beside Owen, who is riding a motorbike, at the head of a part hunting for Indominus. The original dinosaurs looked impressive about two decades ago; the new ones even more so - it looks like they are actually with the actors whenever both are on the screen.The Velociraptors see the return appearance by one of the two favourite dinosaurs from the original film, the other being the T. rex, which also returns. The film is available in 2D and 3D, with the 2D version being the one watched. The attack by the pterosaurs on the visitors to the park is also impressive, and would probably put you off ever going to a dinosaur park, and the Mosasaurus is absolutely enormous as it leaps out of the water to eat a shark, not a fish. At times, you can get annoyed with how the park is being run - there is a serious problem here, and instead of evacuating, they're worrying about money (even though having guests eaten is hardly going to be beneficial for cash flow). In the world of the film, dinosaurs may be old hat by now, but Jurassic World brings them back with an awe-inspiring bang to the cinema, and they've only improved in the time they were gone. 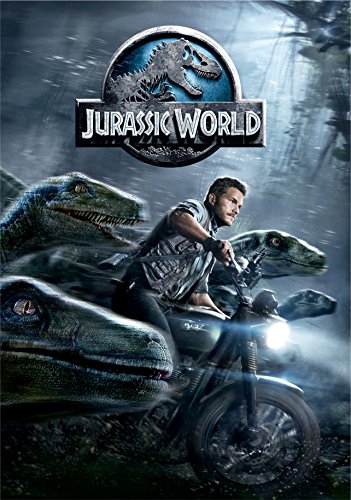