Buy the comic book The Secret Service cheaply from Amazon. You too can earn money from writing articles by signing up for InfoBarrel.
InfoBarrel is a writing platform for non-fiction, reference-based, informative content. Opinions expressed by InfoBarrel writers are their own.
InfoBarrel > Entertainment > Film > Movies

Certificate 15, 129 minutesDirector: Matthew VaughnStars: Colin Firth, Michael Caine, Taron EgertonKingsman: The Secret Service is based on the comic book The Secret Service by Mark Millar and Dave Gibbons. It opens in the Middle East in 1997 when a team of agents in a helicopter assault a fortress. During the mission, one of the agents is killed. One of the survivors goes to the widow and son of the dead man, and gives the son a medal with a number on the back, with instructions to call it if he should ever need a favour.The Kingsman agents are an independent international intelligence agency, separate from any government, founded in 1919. They are not mercenaries, but are instead dedicated to preserving the peace of the world, and describe themselves as the new knights. The knights are the Knights of the Round Table and their codenames all relate to this. The leader of the Kingsman agency is called Arthur (Michael Caine, Interstellar, Now You See Me, The Dark Knight Rises).

Credit: http://en.wikipedia.org/wiki/Kingsman:_The_Secret_Service#mediaviewer/File:Kingsman_The_Secret_Service_poster.jpgSeventeen years later, after one of the agents, Lancelot (Jack Davenport), is killed during a mission whilst investigating what seems to be a group of mercenaries specialising in bio-weapon attacks, they need to replace one of their own. Each existing Kingsman has to sponsor a new candidate. Only one of these will make it into the organisation itself.The son of the dead man from the beginning of the film, Gary, or "Eggsy" (Taron Egerton), has now grown up. Despite having great potential, both intellectually and physically, he has turned to drugs and petty crime, dropped out of the Royal Marines partway through training, and has never had a job. After a car chase he is arrested by the police and is facing a stretch inside, so he rings the number on the back of the medal and calls in the favour. The man who originally gave him the medal, Harry Hart, codenamed Galahad (Colin Firth, Before I Go to Sleep, Tinker, Tailor, Soldier, Spy), gets him off the charges - that's his favour. Following a discussion in a pub in which Galahad demonstrates his impressive fighting talents against a group of local thugs, Galahad decides to sponsor Eggsy, as he did his father before him.The Kingsman agents are all rather aristocratic - gentlemen spies in fact. Eggsy is definitely not, and consequently gets a bit of stick from some of the stereotypical (albeit very competent) snobs also applying. He is not the only candidate being interviewed for what is described as the most dangerous job application there is; so dangerous that one of the candidates fails to survive it. Only one of the applicants will complete the process and will become the new Lancelot. He is definitely the most common of them. Much of the film is taken up by Eggsy's application and training to become a Kingsman, whilst in the background Galahad is investigating the circumstances that led to Lancelot's death. In particular, the actions of billionaire internet mogul Valentine (Samuel L. Jackson, Avengers: Age of Ultron, Captain America: The Winter Soldier, RoboCop, The Avengers).Valentine is a good old-fashioned criminal mastermind in the style of the old 1960s Bond villains. He even has an unusual sidekick-assassin, Gazelle (Sofia Boutella), who has some literally killer legs (a more modern version of Nick Nack or Oddjob). Both Galahad and Valentine make references to those old-style films in a talk with each other, both claiming to be fans. The concept has been altered and modernised to a certain extent. The spies are still gentlemen spies, well dressed and equipped with advanced high -tech weaponry and equipment - pure James Bond stuff. Merlin (Mark Strong) is a variant of Q - if Q starts toting an assault rifle and gets a bit more involved in the action. Valentine is an unusual villain. He hates the sight of blood - anyone's blood. He's definitely plotting something, but what? Valentine has also got the backing of quite a few powerful and/or wealthy people behind him, which makes it fortunate that Kingsman is independent of national governments, many of which appear to have been compromised.This is a violent film (as the Kingsman agents show just how truly lethal they are), with a fair bit of blood, but occasionally the violence enters pure comic realms, becoming, probably deliberately, unrealistic (in the main case, it would have turned the film horribly gory otherwise). Lots of action and stunts, and Colin Firth proving to be rather effective in his action role, something he is not exactly known for (his portrayal of a Roman legionnaire in The Last Legion was rather unconvincing). The combination of gentleman and spy works well for him, being able to deal out death and violence whilst dressed in a bespoke suit. A gentleman always has a good suit. It's not just violence, though, as there is plenty of humour too. This may not be a 1960s Bond film, as is stated within it, but it's definitely been inspired to a certain degree by them. By the end of it, Eggsy is looking quite dashing in his new suit, and is equally adept at violence, even if he isn't as well-spoken as the rest of the Kingsman agents but, as Galahad tells him, being a gentleman isn't how you were born or how you talk. Samuel L. Jackson's portrayal of the lisping, and rather squeamish considering his plans, villain is also a nice touch; it's not as extreme as Doctor Evil, but it's certainly not standard. If you like Matthew Vaughn's other films, you are probably going to enjoy this one too. Kingsman: The Secret Service is a spy movie with lots of gadgets, violence and quite a bit of humour, and is certainly deserving of a sequel (and be sure to wait for the credits scene). 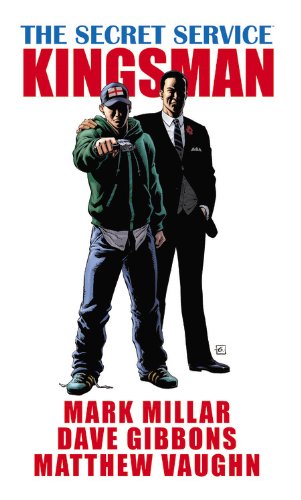