Watch Larry Crowne online. Read more articles on film and television. You too can earn money from writing articles by signing up for InfoBarrel.
InfoBarrel is a writing platform for non-fiction, reference-based, informative content. Opinions expressed by InfoBarrel writers are their own.
InfoBarrel > Entertainment > Film > Television

12A certificate, 98 minutesDirector: Tom HanksStars: Tom Hanks, Julia Roberts and Sarah MahoneyLarry Crowne (Tom Hanks, Captain Phillips) likes his job at U Mart. He's good at his job, is popular with the staff and has won employee of the month eight times so far. Summoned unexpectedly to see the store management, he expects that he's going to be told that he was won employee of the month yet again. Instead, after one of the four members of the management team tells him that U Mart don't discriminate for any reason - it says so on their website - they promptly do discriminate against him.Larry joined the US Navy and served as a cook for twenty years before he came to work for U Mart. As a consequence of this, he has never been to college, and according to U Mart, this means he has no chance for any further promotion within the "U Mart Family" - this, despite the fact that two of the management team present are shining examples of why promoting someone just because of their qualifications is a bad idea. This lack of college education means that Larry is losing his job.L

Credit: http://en.wikipedia.org/wiki/File:Larry_Crowne_Poster.jpgosing his job and having a large amount of free time on his hands leaves Larry unsure of what to do and having problems with his mortgage payments, especially as he bought his ex-wife's share of the property out when they got divorced. He buys a Vespa scooter from his next door neighbour, Lamar (Cedric the Entertainer), who runs a permanent yard sale, and goes to college to sign up for classes, also on the advice of Lamar, not wanting to be caught out again, additionally working as a cook (or culinary specialist) at a restaurant owned by a friend of his.He takes a couple of classes, one on conversation (Speech 217) taught by Mercedes Tainot (Julia Roberts, Mirror Mirror), who is getting somewhat disillusioned with her teaching, on the recommendation of the Dean, and one on economics taught by Dr Ed Matsutani (George Takei, who played Hikaru Sulu in the original Star Trek), a teacher who makes jokes related to the course that no-one laughs at, and proves to be good at these.The Vespa results in his striking up a friendship with fellow student, Talia Francesco (Gugu Mbatha-Raw), who decides that "Lance" - as she decides he should be called - needs a makeover and over the course of the film changes how he dresses and redoes his house, as well as getting him to join her "gang" of scooter riders.Larry is attracted to his teacher, Mercedes, although she is currently married. Her marriage is in a bad way, partly because her husband, Dean (Bryan Cranston, Drive, Godzilla), effectively does nothing constructive all day. Supposedly, he is a blogger, but he rarely writes anything, instead spending a large amount of time viewing "adult" web sites.Larry Crowne is a romantic comedy, based on the developing relationship between Larry Crowne and Mercedes Tainot, as well as Larry's remaking of himself - with Talia's help. A perfectly decent if not stunningly original rom-com, and a nice easy watch. 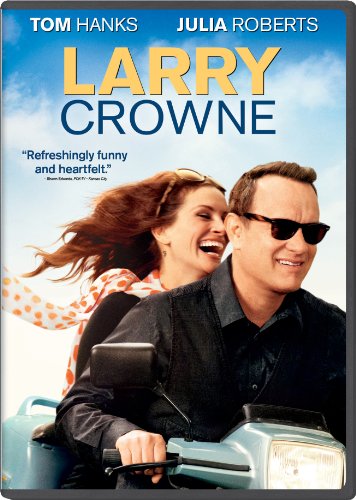