Watch Last Vegas cheaply on Amazon or read more articles on film and television. You too can earn money from writing articles by signing up for InfoBarrel.
InfoBarrel is a writing platform for non-fiction, reference-based, informative content. Opinions expressed by InfoBarrel writers are their own.
InfoBarrel > Entertainment > Film > Movies

Certificate 12A, 105 minutesDirector: Jon TurteltaubStars: Robert De Niro, Michael Douglas, Morgan FreemanLast Vegas starts with a fairly short scene about a group of friends growing up in Flatbush in Brooklyn, New York before continuing 58 years later, with the boys now a lot older. Sam (Kevin Kline) is living with his wife in Naples, Florida, in a retirement village, something he is finding depressing, Archie (Morgan Freeman), who is suffering from a number of health problems, is living with his son Ezra's (Michael Ealy, Underworld: Awakening) family in New Jersey, Paddy (Robert De Niro) is living fairly miserably in Brooklyn, New York in an apartment and Billy (Michael Douglas, Ant-Man, Haywire) lives in a beach house in Malibou, California, with his girlfriend Lisa (Bre Blair). Billy seems to be successful doing something, although what it is that he is actually doing is never made clear. He also appears to be in denial about his age.

Credit: http://en.wikipedia.org/wiki/File:Last_Vegas_Poster.jpgBilly is marrying his girlfriend in Las Vegas, even though his bride to be is less than half his age - for which he gets quite a lot of ribbing, even though Sam is actually hitting on women that are even younger throughout much of the film - and Archie and Sam decide that they should have a bachelor party in Las Vegas before the wedding. Getting Paddy to come is a bit of a problem as he has issues with Billy that they still haven't sorted out and is not speaking to him any longer.The group do travel to Vegas and manage to convince Paddy to come with them, with the intention of having a good time, no matter what. The man assigned to look after them by the hotel, Lonnie (Romany Malco), isn't best pleased that, instead of 50 Cent (who does make a brief cameo), he is actually looking after a bunch of old guys who don't even know who 50 Cent is, but he finds them more entertaining than he expects. They also make friends with a lounge singer, Diane (Mary Steenburgen). As well as Curtis Jackson/50 Cent, the DJ Redfoo (aka Stefan Gordy, half of LMFAO) makes an appearance as himself as a DJ hosting a bikini competition that the group volunteer to act as judges for.Last Vegas has no great surprises to the plot as things get sorted out and relationships get patched up in just the way you would expect and nothing really happens that couldn't be seen coming from some way off. Still, it's a nice feel good film with a fair bit of comedy to it - and with an awful lot of young women in bikinis in it, so should appeal to a variety of audiences. The primary characters are all old hands and know what they are doing, so they turn in decent if not exactly ground-breaking performances. It has been compared to a toned down version of The Hangover, and it certainly isn't as frenetic as that film, but then the cast, and characters, are quite a bit older. It may be called Last Vegas but there looks to be a good chance that it won't actually be the last and a sequel seems quite likely. 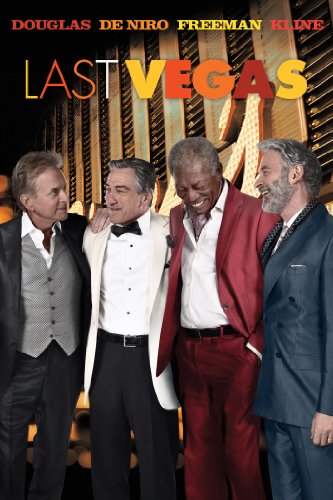