Watch Lockout cheaply on Amazon, or read more articles on film and television. You too can earn money from writing articles by signing up for InfoBarrel.
InfoBarrel is a writing platform for non-fiction, reference-based, informative content. Opinions expressed by InfoBarrel writers are their own.
InfoBarrel > Entertainment > Film > Movies

Certificate 15, 95 minutesDirectors: James Mather, Stephen St. LegerStars: Guy Pearce, Maggie Grace and Peter StormareLockout stars Guy Pearce (Prometheus) as the wisecracking CIA agent star of the film, Snow. MS One is the ultimate high security prison - it's in space and the prisoners are kept in suspended animation so riots and breakouts simply can't happen. In theory, anyway.Hydell (Joseph Gilgun) is an inmate on MS One with poor impulse control - if he wants to do something, he does it, without any consideration of the results of doing so. This is likely the reason why he is both a criminal and locked up. During an interview with Emilie Warnock (Maggie Grace, Taken 2, Taken 3) who is investigated claims of the abuse of and experimentation on prisoners, the daughter of the US President (Peter Hudson), for which he has been revived to take part in Hydell manages to break free and releases all the inmates.

Credit: http://en.wikipedia.org/wiki/File:Lockout_film_poster.jpgSnow is dispatched to MS One to rescue Emilie as an alternative to being locked up himself for some time. He goes to the station, infiltrates it and fires Emilie, making quips the entire time.There are two plots running concurrently throughout the film; one of them is Snow's infiltration of MS One to rescue the President's daughter, the other is regarding to the sale of US government secrets, a crime for which Snow has been arrested for. The chief of the Secret Service, Scott Langral (Peter Stormare), is involved in both plotlines and his character is somewhat unreadable - in a good way.Lockout is not the most original concept for a film; a rogue operative is dispatched into a high security prison to rescue a VIP who has been taken hostage there. It was compared to John Carpenter's Escape from New York, and its inferior sequel Escape from LA - a similarity that was very noticeable after it was pointed out - with Snow taking the place of Snake Pliskin.Oddly, the two inmates with the largest speaking roles and most important parts - Hydell and Alex (Vincent Regan) - are both Scottish. The reason this is odd is because this is supposedly a United States facility and it would seem unlikely that that a pair of Scots would be the prisoners who take control. This is probably actually due to casting; the film is a European production and much of the cast is European, not American.Some of the special effects were somewhat sub-par, most notably the chase scene near the beginning of the film where Snow is escaping from pursuers on a bike which in places doesn't look at all real. Much of the scene isn't real, naturally, but it should at least look realistic. Having MS One start to fall out of orbit so quickly after the mutiny is also a bit unlikely; satellites that fall out of orbit in a matter of hours weren't actually in orbit to start with.There is also a completely arbitrary and probably unnecessary space combat sequence thrown it, apparently just because they could do it, with typically unrealistic, if fun, battle scenes.Pearce's character of Snow is a fairly fun watch, and there's a fair bit of violence and explosions, but Lockout as a whole lacks a certain something and certain revelations were entirely predictable. 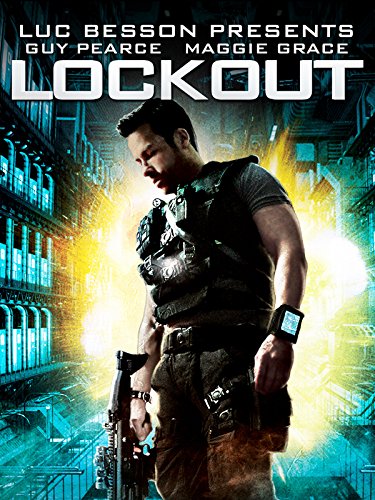