Buy Lucy or Limitless cheaply from Amazon. You too can earn money from writing articles by signing up for InfoBarrel.
InfoBarrel is a writing platform for non-fiction, reference-based, informative content. Opinions expressed by InfoBarrel writers are their own.
InfoBarrel > Entertainment > Film > Movies

Certificate 15, 89 minutesDirector: Luc BessonStars: Scarlett Johansson, Morgan Freeman, Min-sik ChoiLucy begins in Taipei, Taiwan, where the titular Lucy (Scarlett Johansson) is asked by her boyfriend of the moment, Richard (Pilou Asbæk), to deliver a case to a Mr. Jang (Min-sik Choi) as he cannot do it. Although she refuses, Lucy gets suckered into doing it. Mr. Jang is a Korean gangster of some description, and the case has four bags of a blue crystalline substance, which is apparently a new drug called CPH4, inside it.Against her will, Lucy is forced into becoming a drug mule, with the new drug in a packet surgically implanted inside her. After she refuses the advances of one of Jang's minions, he hits her, the bag ruptures, a massive dose of the drug enters her bloodstream and that's when things start to get weird. Lucy reacts oddly to the drug, somehow ending up dangling in the air on the end of the chain she is currently fastened to, before losing consciousness. When she comes round again, she is different. Lucy is calmer, more collected, more confident, and more talented. She also seems less human and more emotionless, a difference that is very noticeable, as prior to that she was a frightened, crying wreck. Initially starting as more knowledgeable, her senses are heightened and she starts to remember everything. As the film progresses, she gains more and more abilities.

Credit: http://en.wikipedia.org/wiki/Lucy_%282014_film%29#mediaviewer/File:Lucy_%282014_film%29_poster.jpgAt the same time, Professor Samuel Norman (Morgan Freeman) is giving a lecture on the expanded use of the human brain. He gives examples of what he thinks the brain could be capable of if 20% or more of its capacity is used, instead of the measly 10% he says it currently uses. He theorises that control over one's body, and later the environment, would become possible. Lucy knows that the drug will quickly kill her, so, having come across his research and thinking that it shows promise, contacts the professor and says that she will meet him in Paris. Along the way, she encounters a Parisian policeman, Captain Pierre Del Rio (Amr Waked), who ends up tagging along with her. Jang is also less than happy, as drug mules are not supposed to walk off with their drugs.Interspersed are various scenes, the majority at the beginning of the film, which are presumably there to illustrate what the person currently speaking is talking about. Sometimes these work, sometimes they don't. Later on, the only bits interspersed are the percentage of her brain that Lucy is supposedly currently at.The inevitable comparisons to the film Limitless, in which Bradley Cooper's character, Eddie Mora, takes an experimental new drug and gains the ability to use his mind at a much higher level than the human norm are natural and obvious, but Lucy takes that idea far beyond what was done in the other film and makes Eddie look pretty pitiful in comparison. She's pretty much unstoppable and, as the film progresses, no longer even needs to kill those trying to stop her, as she simply disarms them and renders them no longer a threat. Lucy's physical and mental abilities are vastly superior to Mora's; she can not only think and remember better, she also is able to control her own body and the surrounding environment. Limitless on steroids as it were.This is a rather hard film to judge. Is it a good film or not? It's hard to say. The abilities that Lucy gains may be possible, or they may not - as Professor Newman says, it's all theoretical. There is no real idea as to what a person using that much of their brain would be capable of, so the choice looks to have been made to simply make stuff up as they go along, and whatever looks like it might be good. Del Rio seems to be following Lucy because he's simply out of his depth; he doesn't really seem to need to be there - which is something he actually says, so that point is recognised and covered at least. Other parts don't seem to make a lot of sense if thought too deeply about. Part of the ending of the film can be guessed - certainly Lucy's last line - but other bits seem to have been made deliberately obscure. This could be because if the end wasn't made that obscure, some parties would rather easily take offence to it. There are by the looks of it inspirations from other science fiction films, such as 2001: A Space Odyssey, with something that is handed over close to the end, but certainly not limited to that film. Some may only become clear in retrospect, as they are less obvious. Lucy is a definitely different film that won't appeal to everyone, with some weird and some unpleasant scenes. 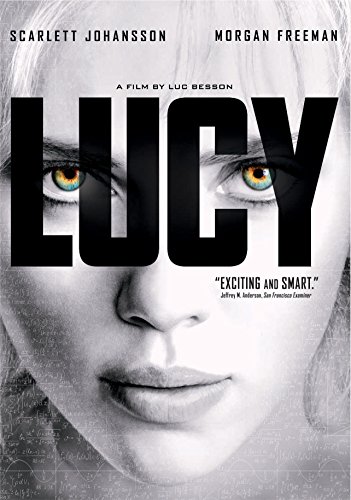