Get the original Machete or Machete Kills cheaply from Amazon. You too can earn money from writing articles by signing up for InfoBarrel.
InfoBarrel is a writing platform for non-fiction, reference-based, informative content. Opinions expressed by InfoBarrel writers are their own.
InfoBarrel > Entertainment > Film > Movies

Certificate 15, 107 minutesDirector: Robert RodriguezStars: Danny Trejo, Alexa Vega, Mel GibsonMachete Kills is the sequel to Machete, a film that was expanded from a fake trailer for it in the film Grindhouse. The character of Machete Cortez (Danny Trejo) has also appeared in all four of the Spy Kids films, although his portrayal was rather less extreme than it is in this one.Machete, who tends to refer to himself by this name, rather than in the first person, - "Machete don't tweet" - is a former Mexican Federales who is recruited by the US President (introduced as Carlos Estevez, which is actually the real name of actor Charlie Sheen, who appears to be playing himself) to track down - and stop by any means necessary - a would-be Mexican revolutionary called Mendez (Demian Bichir) who has a rocket aimed at the US. Mendez is quite mad, and switches personalities constantly. Mendez is not the only problem; the true criminal mastermind is the arms manufacturer Voz (Mel Gibson, The Expendables 3), who appears to have watched the James Bond film Moonraker too many times and now thinks he is Hugo Drax. He is certainly plotting as if he is. Moonraker probably isn't the only film that is referenced; there certainly appear to be quite a few more.

Credit: https://en.wikipedia.org/wiki/File:Machete_Kills.jpgMachete's role is quite simple - stop Mendez, and then stop Voz and his army of super soldiers. Matters aren't helped when a ten million dollar bounty is put on Machete's head, resulting in him being pursued by a trigger-happy assassin known only as known El Camaleón, who lives up to his name and is played by Walton Groggins, Cuba Gooding Jr., Lady Gaga and Antonio Banderas (The Skin I Live In). Machete has an ally in the also violent Luz (Michelle Rodriguez, Fast & Furious 6, Fast and Furious 7, Resident Evil: Retribution).Danny Trejo is a familiar face who appears in a lot of films, and television programmes, usually as a minor character, often a blade wielding thug of some type, but rarely as the main character. This is an interesting diversion from his normal support character roles. He may not be the world's best actor, but he certainly plays a badass very well - probably because he used to be a genuine one before he became an actor.This is a very silly film, but it doesn't pretend to be otherwise. It has a lot of completely over the top violence, coupled with plenty of large amounts of pretty unrealistic gore as people are chopped with machetes (of course), shot and fed into helicopter rotors and boat propellers. Machete Kills doesn't take itself too seriously and neither should you if you want to enjoy it in all its full, testosterone-filled violent glory. Lots of, as mentioned, bloody violence and death, with many minor characters not getting through the film, and some major ones also falling by the wayside, the frequent use of often suggestive language and woman running around with not exactly huge wardrobes - except for the guns they carry - make this a completely family unfriendly film, even though it isn't as gruesome as it could have been if it actually took the violence seriously. Watch out for an appearance of Elon Musk (co-founder of PayPal and Tesla Motors, and founder of SpaceX) as himself in it. There is an in development sequel, Machete Kills Again... In Space!, with a trailer for it for it at the beginning of the film. Machete Kills is not for everyone, but pretty fun if you want to see a bloody, violent, action-packed film that pokes a lot of fun at the entire action genre - including itself. 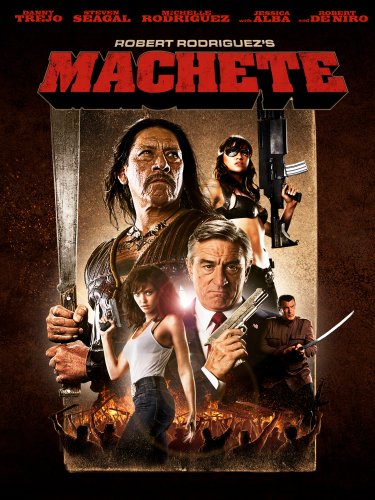