Get Mad Max: Fury Road or the original Mad Max films from Amazon. You too can earn money from writing articles by signing up for InfoBarrel.
InfoBarrel is a writing platform for non-fiction, reference-based, informative content. Opinions expressed by InfoBarrel writers are their own.
InfoBarrel > Entertainment > Film > Movies

Certificate 15, 120 minutesDirector: George MillerStars: Tom Hardy, Charlize Theron, Nicholas HoultMad Max: Fury Road starts with Max (Tom Hardy, The Dark Knight Rises, This Means War) giving some of his background - he was a former policeman who now just tries to survive, haunted by his past. It's never explained in this film what it is in his past that haunts him, but he occasionally sees glimpses of his past. In the background, there are mentioned the Oil Wars, then the Water Wars, and thermonuclear skirmishes. After all this, the world that is left is a desolate, post-apocalyptic wasteland.Despite his attempts to escape, Max's car is stopped by the War Boys of Immortan Joe (Hugh Keays-Byrne) and he is captured. The War Boys are pallid, bald, and scarified soldiers, often with some physical mutations, who live in the hope of dying in such a way that Immortan Joe will open the gates of Valhalla for them, so that they will be reborn shiny and chrome. Immortan Joe is the dictator of the Citadel, where he controls the supply of water, as well as Gas Town and the Bullet Farm, and looks to be himself suffering from a number of physical problems, as are his grown children. Most people seem to be marked in some way. At the Citadel, Max is tattooed and kept locked up, where he is used as a blood bag, a living supply of blood for the War Boys, due to him being a universal donor.

Credit: https://en.wikipedia.org/wiki/Mad_Max:_Fury_Road#/media/File:Max_Mad_Fury_Road_Newest_Poster.jpgA convoy headed by a War Rig driven by the one-armed Imperator Furiosa (Charlize Theron, A Million Ways to Die in the West, Prometheus, Snow White and the Huntsman) - whose other arm is artificial - is heading on a supply run to Gas Town and the Bullet Farm. On the way, she diverts from her original destination. The War Boys with Furiosa think that this is planned; back at the Citadel, it's known otherwise. Joe discovers that Furiosa has taken all of his "wives" - who are in real life all models, even though they may have other talents as well - who are all in much better shape and much more attractive than the current norm and leads a war party after her, summoning reinforcements from the Bullet Farm and Gas Town.One of the War Boys who sets in pursuit is Nux (Nicholas Hoult, Jack the Giant Slayer, Warm Bodies, X-Men: Days of Future Past, X-Men: Apocalypse). Nux was using Max as a blood bag, and doesn't have enough blood yet to go after Furiosa, so he takes Max with him as a portable blood supply, strapped to the front of his vehicle. During a dust storm, Nux's vehicle crashes and Max gets free, stumbling across the War Rig. Things do not go smoothly, at least initially, between Max and Furiosa, but they eventually seem to get along.From Furiosa taking off in the wrong direction, the film is pretty much one, long vehicular battle, although there are pauses now and then, as Furiosa goes up against Joe's forces and motorbike bandits. The vehicles are distinctly odd to look at, most being hybrids of two or more vehicles, with bodies from one vehicle fastened on to the chassis from another, and some looking like the offspring of a car and a porcupine. Odd weapons, flamethrowers, exploding spears and a mobile sound stage complete with drummers and a guitarist/flamethrower - which apparently provides much of the soundtrack to the chase - add to the confusion. Despite oil apparently being scarce, everyone seems to have more than enough to drive for hours through the wasteland - although the War Rig has a fuel pod and Joe's forces have tankers.Unlike most modern versions of older films, this doesn't appear to be a simple reboot of the Mad Max franchise, the series that made Mel Gibson into an international star - instead, it seems to be the fourth in the series, rather than starting again from the beginning. Which does mean that anyone who hasn't seen any of the other films in the series may be slightly in the dark as to Max's background, despite his brief description of his past at the start. It does seem to be pretty true to the spirit of the original films - albeit much bigger. At two hours, this is quite a long film, but it doesn't actually seem that long as, apart from the odd breather, the action is pretty much non-stop. Explosions, vehicle (they really can't be called cars) chases, crashes, guns, flame throwing guitars, death-obsessed scarified War Boys with an extreme liking for chrome and violent biker gangs, it just keeps going.Max, for much of the film, doesn't say much at all, especially at the beginning, generally just using grunts and gestures. The impression is given of a man disturbed - he is called Mad Max, after all. In the company of Joe's wives and Furiosa, he gradually seems to come out of his protective shell, and starts to actually talk to the others. This may be an action film, but it is also one where the characters themselves are quite important, whether it's the "treasured" wives of Immortan Joe, the one-armed Furiosa out for redemption, the borderline crazy Max or Nux, the War Boy who gets confused enough that he strays from his path as devoted fanatical follower of Joe; these are not the simple one- or two-dimensional characters that are so often seen in action films. They actually seem to have personalities.Visually, the film is a treat. The vehicles and costumes - and scars of the War Boys - all appear to have great attention paid to their detail. Admittedly, one in which Joe's skull motif features quite prominently in the decoration. The stunts and chase are all completely over the top explosive goodness. It is available in both 2D and 3D, with the 3D being the one seen. With it largely being live action, the 3D didn't add all that much, apart from in a handful of scenes, including at least one that can make you blink as a grenade hurtles out of the screen. Mad Max: Fury Road is a great action film, and neither a tired fourth film in a series, nor a reboot of a franchise, that has elements that many action films lack, such as interesting characters. 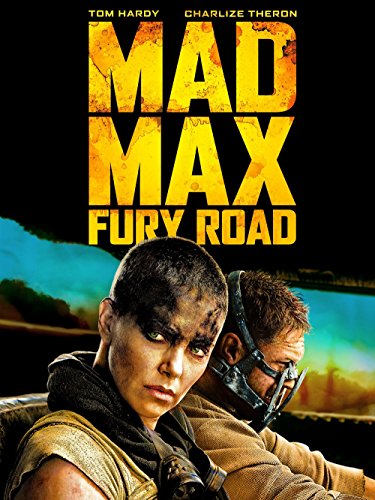