Get Mama cheaply from Amazon, or read more articles on film and television. You too can earn money from writing articles by signing up for InfoBarrel.
InfoBarrel is a writing platform for non-fiction, reference-based, informative content. Opinions expressed by InfoBarrel writers are their own.
InfoBarrel > Entertainment > Film > Movies

Certificate 15, 100 minutesDirector: Andrés MuschiettiStars: Jessica Chastain, Nikolaj Coster-Waldau, Megan CharpentierAt the beginning of Mama, a supernatural horror story, three year old Victoria and one year old Lily are taken by their father Jeffrey (Nikolaj Coster-Waldau, The Other Woman) from his estranged wife and they drive off and all vanish. Five years later a continuing search organised since the disappearance by Jeffrey's brother Lucas (also played by Nikolaj Coster-Waldau), who had never given up on looking for the girls and his brother, finds Victoria (Megan Charpentier) and Lily (Isabelle Nélisse) still surprisingly alive in an abandoned house by a lake, where they have turned feral having not had human contact during that time. They have somehow apparently managed to survive by themselves.

Credit: http://en.wikipedia.org/wiki/File:Mama_2012_poster.jpgTaken back to civilization and after days of examination and study by psychiatrist Dr Gerald Dreyfuss (Daniel Kash) the girls are released into the custody of Lucas and his rock chick and  rock band member girlfriend Annabel (Jessica Chastain, Crimson Peak, The Martian). It slowly becomes apparent that the children did not manage to survive by themselves, and that their imaginary friend who helped them survive, whom they call "Mama" (Javier Botet/Jane Moffat), actually exists and she, whatever she or it is, has followed them back to their uncle's house. Initially only glimpses are seen of the being called Mama, but as her back-story is revealed, mostly from the actions and investigations of Dr Dreyfuss, more of Mama herself is seen and it appears that she may be a ghost of some sort.The primary characters in Mama are Lucas' girlfriend Annabel, rather than Lucas himself, and the children Victoria and Lily possibly because Annabel is not actually a blood relative and therefore how she deals with the unexpected arrival of two children is more interesting. Annabel was initially neither prepared for nor wanted to be the effective mother of two already partly grown children and initially struggles to cope, or even to want to cope. As the film progresses Annabel's relationship with the sisters develops and she becomes genuinely attached to them. The two girls quite effectively react to something that is likely not actually there during the film, especially given that they are both quite young, adding believability to the existence of Mama.Mama is based on a 2008 Spanish short film by Andrés Muschietti that caught the attention of Guillermo del Toro and was subsequently made into a feature length film. During the opening credits some of the story of what happened in the five years the girls were missing is told in drawings made to look as if they were done by a child using crayons. By watching this you can see how the children manage to survive. Although there is some violence, this isn't a gore splattered film, but a more old fashioned movie of the supernatural horror type, although not quite as subtle as, for example, The Woman in Black. Mama is definitely worth a watch for those who prefer an actual story to gore. 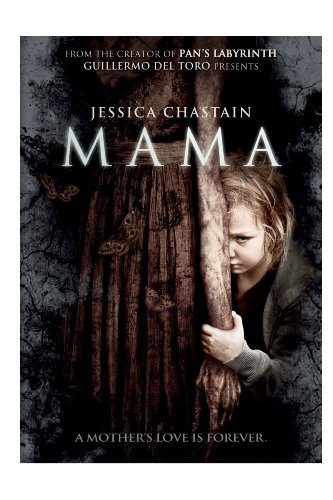 Mama Amazon Price: $14.98 $3.93 Buy Now(price as of Jan 14, 2016)
Mama, a supernatural horror story. Two girls lost for five years didn't survive by themselves - they had help. Now they have been found, and Mama has followed them home.
Next >> Movie Review: The Girl on the Train