Watch Man on a Ledge cheaply online from Amazon, or read more articles on film and television. You too can earn money from writing articles by signing up for InfoBarrel.
InfoBarrel is a writing platform for non-fiction, reference-based, informative content. Opinions expressed by InfoBarrel writers are their own.
InfoBarrel > Entertainment > Film > Movies

Movie Review: Man on a Ledge

Certificate 12A, 102 minutesDirector: Asger LethStars: Sam Worthington, Elizabeth Banks and Jamie BellMan on a Ledge is a thriller starring Sam Worthington as Nick Cassidy, a former New York cop who was sentenced to go to prison for stealing the $40 million Monarch diamond from businessman David Englander (Ed Harris, Gravity, Run All Night). Cassidy has escaped after serving two years of his sentence. Always insisting that he was innocent and had been set up by Englander, who had faked the robbery, Cassidy is now trying to prove his innocence.In order to do this, several weeks after his escape from prison, he first steps out onto a ledge on a hotel 20 stories up in an apparent suicide attempt. Detective Lydia Mercer (Elizabeth Banks, The Hunger Games, The Hunger Games: Catching Fire, The Lego Movie) is the police negotiator who is trying to talk him down from the ledge. Meanwhile, this is merely a sideshow to distract attention from his true intentions - to steal the Monarch diamond from Englander and thus prove that it was never originally stolen. Cassidy's brother Joey (Jamie Bell, Fantastic Four) and Joey's girlfriend Angie (Genesis Rodriguez) break into Englander's business across from the hotel where Cassidy is staging his suicide attempt to get the diamond.

Credit: http://en.wikipedia.org/wiki/File:Man_on_a_Ledge_Poster.jpgThe majority of Man on a Ledge covers based around two different threads of the story that are unfolding at the same time. The first is the interaction between Detective Mercer and Nick Cassidy, as Mercer tries to talk Nick back inside the hotel room, whilst Nick is trying to convince her that he is innocent and had been setup - as a result of which Mercer starts doing her own research, getting the papers found in Cassidy's prison cell and talking to a number of different members of the police department including Cassidy's former partner Mike Ackerman (Anthony Mackie, Abraham Lincoln: Vampire Hunter, Avengers: Age of Ultron, Captain America: The Winter Soldier, Runner, Runner). This thread takes place on the ledge and in the hotel room.The second thread of the story is Joey Cassidy's and Angie's break-in at Englander's building. This thread mostly takes part inside ducts and shafts in the building, and is a more technical side requiring bypassing or neutralising various alarm systems.The two story threads interact with each other through the communications, hidden in Nick's case to maintain the reality of his suicide attempt, that the two Cassidy brothers have with each other, with Nick also providing distractions when needed, for example, by throwing money off the building.Man on a Ledge is a perfectly adequate, if formulaic, thriller. There are almost no surprises in how the film turns out and the majority of the story unfolds in exactly the way you would anticipate. With a substantial proportion of the film happening on the ledge of the title and the hotel room said ledge is off, and the parts that aren't mostly being the break in carried out by Joey and Angie, there is very little action for much of the film, except when it reaches its' climax towards the end. Not bad but not great. 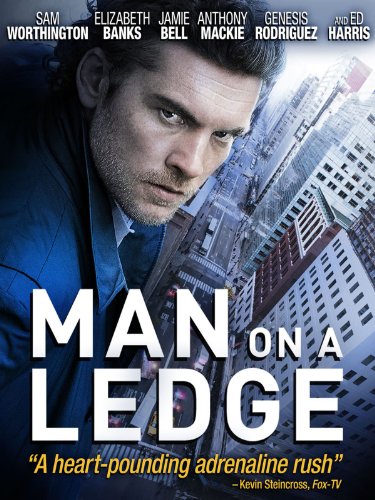