Buy the Men in Black films cheaply from Amazon, or read more articles on film and television. You too can earn money from writing articles by signing up for InfoBarrel.
InfoBarrel is a writing platform for non-fiction, reference-based, informative content. Opinions expressed by InfoBarrel writers are their own.
InfoBarrel > Entertainment > Film > Movies

PG certificate, 106 minutesDirector: Barry SonnenfeldStars: Will Smith, Tommy Lee Jones and Josh BrolinA decade after the release of Men in Black II and fifteen years after the first film in the series, the MIBs are back. The film is available in both 3D and 2D versions, the 2D version being the film seen.Both Agent J (Will Smith, After Earth, Focus) and Agent K (Tommy Lee Jones, Jason Bourne, The Family), are still working for the Men in Black, and are still partners.Boris the Animal (Jemaine Clement), a criminal, murderer and the last surviving Boglodite, has

Credit: http://en.wikipedia.org/wiki/File:Men_In_Black_3.jpgescaped from the LunarMax prison on, not surprisingly, the Moon. Agent K was the one who originally arrested him, and Boris definitely bears a grudge. K's defeat of Boris led to the death of the rest of the Boglodite race, so Boris returns back to 1969 and kills K in the past.When Agent J wakes the next day, he is the only one who remembers K - everyone else remembering him - for those that actually remember him at all - as having died 40 years ago. Agent O (Emma Thompson, The Love Punch), the new head of the MIB after Z's death (Z being the head of the MIB in the previous two films), tells J that he will have to travel back in time to 15th July 1969 to stop K from dying, thus preventing the alien invasion now happening in the present that had previously been stopped by K's actions in 1969. Time jumping back to the past apparently involves climbing to very nearly the top of the Chrysler Building in New York and "jumping" off it.Shortly after arriving back in the past, J runs into a young K (Josh Brolin, Guardians of the Galaxy, Sicario, Sin City: A Dame to Kill For) and winds up teaming up with him to stop Boris. With the present day Boris having gone back to 1969 too, there are now two Boris the Animals running around in the past. J and K have to defeat them both. J also runs across a young Agent O (Alice Eve).A substantial proportion of the film has Josh Brolin playing the part of a young Agent K, which he carries off well. He actually sounds like a younger Tommy Lee Jones - apparently the result of months of studying Jones on Brolin's part. If you are a fan of Tommy Lee Jones, he unfortunately doesn't appear in the film much, as the majority of the film is set back in the past.The film itself is the usual science fiction silliness of the MIB franchise; yes there's death and destruction, but there is also quite a bit of humour. This is also the first film Will Smith has starred in for several years (the last being Seven Pounds in 2008), but he still seems to remember how to play the part of J. The logic of the film is sometimes a bit strained, but that isn't unusual when dealing with time travel. If you like the other films in the Men in Black series, you will like this one. If you didn't, you won't. 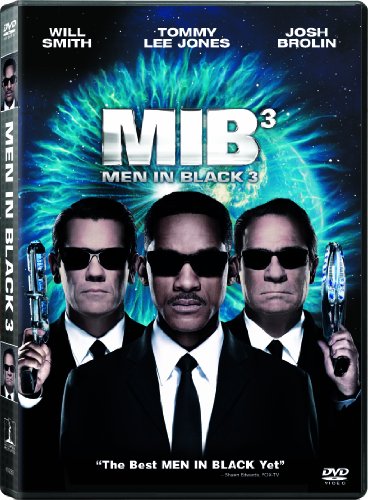