Buy Miami Vice or the original series cheaply from Amazon. You too can earn money from writing articles by signing up for InfoBarrel.
InfoBarrel is a writing platform for non-fiction, reference-based, informative content. Opinions expressed by InfoBarrel writers are their own.
InfoBarrel > Entertainment > Film > Movies

Certificate 15, 134 minutesDirector: Michael MannStars: Colin Farrell, Jamie Foxx, Li GongMiami Vice is a film based on the classic 1980s television series of the same name, which the film's director, Michael Mann, was the executive producer of. At the beginning of the film Miami-Dade police detectives and partners James "Sonny" Crockett (Colin Farrell) and Ricardo "Rico" Tubbs (Jamie Foxx, The Amazing Spider-Man 2, White House Down) are participating in a sting against a pimp when they receive a phone call from a former informant of theirs who is now working for the FBI. The informant, Alonzo Stevens (John Hawkes), is fleeing town, as his cover has been blown, the drug dealers have found out that he is an informant, and threatened to kill his wife Leonetta.

Credit: https://en.wikipedia.org/wiki/Miami_Vice_%28film%29#/media/File:Miami_Vice_Teaser_Poster.jpgSonny contacts FBI Special Agent in Charge John Fujima (Ciarán Hinds, Ghost Rider: Spirit of Vengeance, The Woman in Black, Tinker, Tailor, Soldier, Spy), telling him that their informant is in danger, and he and Rico head after Alonzo. They manage to find him, but Leonetta had been killed, and Alonzo in turn kills himself. Whilst Sonny and Rico are on the way to the Alonzo's house they are called off and told to return to the office by their boss, Lt. Castillo (Barry Shabaka Henley). At the police department, Fujima is present. Because the Miami-Dade Police Department was not originally involved in the Florida Joint Inter-Agency Task Force between the FBI, Drug Enforcement Administration and the U.S. Immigration and Customs Enforcement, this means that they could not be whoever is inside the operation passing information onto the drug lords. Consequently, Crockett and Tubbs can be trusted and are recruited to help.The pair agree to go undercover inside the drug organisation, posing as ex-military types who provide a service delivering narcotics for the Columbians, although they first have to pass an interview with Jose Yero (John Ortiz, Silver Linings Playbook), a nasty type believed to be the cartel's boss, and Isabella (Gong Li), an advisor for the cartel. This involves them in taking various trips to and from boats, the Caribbean and South America, using planes, ships and go-fast boats. Along the way, Crockett gets romantically involved with Isabella, to a level that is potentially dangerous.The characters of Sonny and Rico do not possess the depth of those seen in the original series, although to be fair the series did have over a hundred episodes to develop them rather than a bit over two hours, but still there isn't really anything in the way of backstory or depth to them. This means that it's difficult to empathise with the characters and there is no real "buddy" chemistry between Crockett and Tubbs - they do not give the impression of being partners and friends, but really just that of two people who happen to be working together.This is a very dark film with a lot of, often quite stylish, violence, as well as some great scenery and shots of the sea, land and island of the Caribbean and Columbia, but the stylish violence really needs stylish characters to back it up, and Rico and Sonny just don't manage that. This is a dark and gritty, but not really gripping, film, and you are not left wondering to the degree you should about whether or not Tubbs and Crockett are going to survive. On the whole, Miami Vice is an average action film, with some nice shooting but fairly poor characterisations. 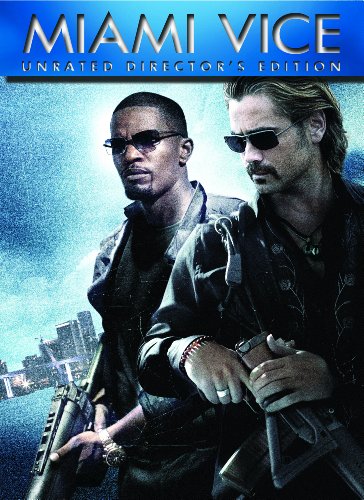