Get Minions cheaply from Amazon. You too can earn money from writing articles by signing up for InfoBarrel.
InfoBarrel is a writing platform for non-fiction, reference-based, informative content. Opinions expressed by InfoBarrel writers are their own.
InfoBarrel > Entertainment > Film > Movies

Certificate PG, 91 minutesDirectors: Kyle Balda, Pierre CoffinStars: Sandra Bullock, Jon Hamm, Michael KeatonMinions is the spin-off film from the Despicable Me series, featuring the Minions, the one or two eyed, goggle and denim-dungaree wearing, small, yellow, pill-shaped creatures who work for Gru. This film is set before they actually met Gru, and it works as a prequel - the three main Minions in this film were seen auditioning for it in the end credits of Despicable Me 2.The starting credits are animated, but not in the way the west of the film is. It depicts early Minions swimming through the seas, following one predator after another, changing predators when the previous one is eaten by the next, until they finally surface out of the water, at which point the computer animation starts.

Credit: https://en.wikipedia.org/wiki/Minions_%28film%29#/media/File:Minions_poster.jpgThe Minions feel a need to have a Master, an evil supervillain to follow and serve. Unfortunately, they are not that good at the latter bit. The Tyrannosaurus rex gets accidentally knocked into a volcano, Stone Age man is eaten by a bear, an accident with the plans for one of the pyramids leads to the Pharaoh being crushed, Dracula is woken up on his 357th birthday to bright sunshine - not something beneficial to the traditional vampire - and Napoleon gets hit by a cannon. The last is the luckiest, for at least he survives, but he sends his troops after the tribe of Minions, who finally end up in an ice cave.The Minions initially enjoy themselves and build their own civilisation, but as time passes, depression sets in - the Minions need an evil Master to follow. Finally, in 1968, one Minion, Kevin (Pierre Coffin, who actually voices all the Minions), decides to leave the cave in search of a new Master. He asks for volunteers to help, and eventually sets off with Bob and Stuart. Finally, they wind up in New York and, after seeing an advert, go to Villain Con. There they see the leading supervillain of the time, Scarlet Overkill (Sandra Bullock, Gravity, The Heat). Kevin, Bob and Stuart manage to get a job with Scarlet and she takes them to her castle in London. As always, things don't exactly go to plan, and the Minions end up causing problems, damaging their relationship with Scarlet.The film is available in both 2D and 3D, with the 2D version being the one seen (although computer animated films do usually work well for 3D). The principal characters in the film, the Minions, although they talk a lot they don't make a lot of sense. There is the odd word that stands out - such as "banana" and their oddly prosaic names - but most of it is pure gibberish, even if you can get the gist of what they are saying.Minions doesn't really work that well if you think about it too much, but it's a fun film to watch with many funny bits. The Minions themselves are endearingly incompetent - as long as you aren't the latest "Boss" they've managed to accidentally kill. There are some little details to watch for in the film that you might miss if you aren't careful that add to it, and there are also various scenes in the credits. Minions is fun, light-hearted - despite all the Bosses that the Minions manage to kill off - and entertaining film to watch, but don't watch it expecting too much from it. 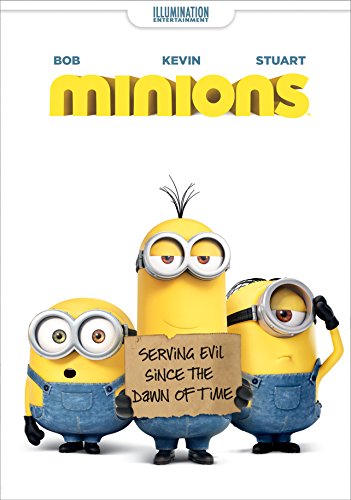