Certificate 12A, 131 minutesDirector: Christopher McQuarrieStars: Tom Cruise, Rebecca Ferguson, Jeremy RennerMission: Impossible - Rogue Nation is the fifth film in the Mission: Impossible cinematic series. It starts in Minsk, Belarus, where the IMF team of Ethan Hunt (Tom Cruise, Edge of Tomorrow, Jack Reacher, Oblivion) and Benji Dunn (Simon Pegg) are on site trying to stop a plane with a load of biological weapons from taking off. They are being helped remotely by Luther Stickell (Ving Rhames). Things are not going well, especially as, at the same time, their boss, William Brandt (Jeremy Renner), is in Washington, D.C., testifying in front of a committee, together with the Director of the CIA, Alan Hunley (Alec Baldwin).Hunley wants the IMF shut down as he doesn't approve of their methods, and considers them to be out of control, and possibly even making stuff up to justify their existence. Hunley is of the opinion that eventually the IMF are going to fail badly, as he believes their success up until now to be a matter of Luck, not skill. He uses as evidence certain events from the previous film, Ghost Protocol - namely, the destruction of the Kremlin and the damage to a skyscraper in San Francisco by a, fortunately deactivated, nuclear missile. Hunley also brings up the events of the first Mission: Impossible film, when the IMF broke into the CIA and stole a list of agents.

Credit: https://en.wikipedia.org/wiki/Mission:_Impossible_%E2%80%93_Rogue_Nation#/media/File:Mission_Impossible_Rogue_Nation_poster.jpgThe weapons on the plane are successfully recovered but, when Hunt goes to a site in London to get his next mission, he is intercepted and captured by an organisation known as the Syndicate. He escapes, with the help of Ilsa Faust (Rebecca Ferguson, Hercules), who appears to be a Syndicate member, but when he contacts Brandt he finds out that the IMF has been dissolved and absorbed by the CIA. Hunley sends people to catch Hunt, but six months later they are still unsuccessful.The Syndicate is an organisation that does the same sorts of things that the Impossible Mission Force does, only their actions tend to be more destructive - chemical plant fires, car and plane crashes, assassinations and the like, which is why Ethan describes it as the Rogue Nation of the title, even though it doesn't appear to work for any government. It's led by the rather emotionless Solomon Lane (Sean Harris), who rarely shows any expression, even when casually shooting people. The Syndicate is comprised of former intelligence operatives from many different countries.Hunt has been searching for Lane for months without any great success. The Syndicate's plans are nested; there are multiple contingencies planned for each operation. Their goal is uncertain; it doesn't appear to be simply terrorism, but it's definitely destructive. Hunt has to try and find and stop Lane, who always seems to be one step ahead, whilst he is being hunted by the CIA and has limited resources. Ilsa Faust's motives are uncertain; she sometimes helps but also sometimes hinders Hunt, so it's never certain whose side she is actually on - Hunt's Lane's or something else entirely.This latest instalment holds true to the format of the Mission: Impossible film series, albeit with possibly more humour than was seen in the early films, largely due to Simon Pegg, which means that, like the others in the series, it doesn't follow the pattern of the original television series. In the films there is more action, more, rather bloodless considering how many people are killed by it, violence, and less of the intricate and carefully planned plots seen in the original series. Instead, the films rely on action and set-pieces.Following that pattern, there are various magnificent set-piece scenes in various places, such as Vienna, Morocco and London - once again, the IMF are travelling all over the globe - and some impressive car chase scenes. This is definitely an action film, and an impressive one at that, not of the more cerebral nature of its television origin. Tom Cruise shows that he can still perform quite impressively as an action star, even though he's now getting on a bit in years. Simon Pegg provides a more light-hearted counterpart, Sean Harris's villain is suitably menacing and the motives of Rebecca Ferguson's character need to be guessed at, providing an element of uncertainty. The other actors aren't really utilised as much - they are more background scenery than anything - and Alec Baldwin's character seems to have elements common to most roles he's played over the past decade. Mission: Impossible - Rogue Nation should please fans of the series; there's plenty of the action and set-pieces that the series is known for, together with some twists and turns to the plot that can keep you guessing, as well as a suitably menacing, and intelligent, villain to go up against. 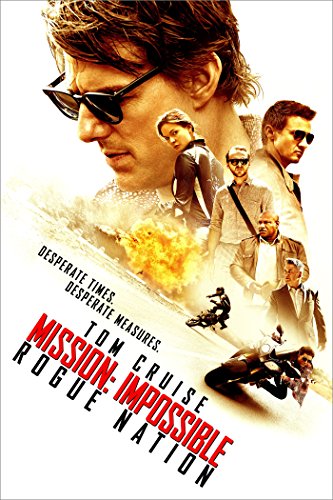